Color in Our Lives 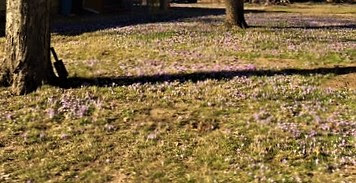 The day has been positively gorgeous for February. The yellow of the bright sun energizes folks especially in February! Color is important to us and gray clouds can make us lethargic. Color everywhere, even the ones we choose to wear, shapes us, moves us, causes us to feel warmth, anger, comfort, sadness, and more.


When I was in high school, I did not have an abundance of clothing. I learned real fast that black and earth tones were slimming, versatile, classic, and did not call attention to yourself if you were in a class you hated and where you wanted to fade into the woodwork.


But when I married and moved into the St. Louis suburbs, I met a woman who introduced me to color. It was the years of green and orange which already made a statement in homes. Donna had left school after the 8th grade, and then she taught herself to play the organ for church and to paint beautiful floral pictures. She had a smile that could light up a city block, and she loved color. She was the one who dragged me away from black and showed me the joys of color in clothing and in the home.


I love the richness of hardwoods like oak and cherry in my home. I love turquoise. I like blue and white. I no longer stand back from splashes of color like dashes of red, a kiss of purple, or even oranges and yellows. I say that I play house with my dining room table because I have been too sick to host guests, to hold dinners, or present teas. Still on the good days I change the table setting to make me feel good. 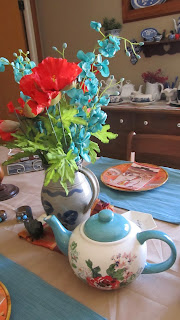 This month I chose turquoise placemats and plates with orangey pink backgrounds that remind me of the Southwest. The poppies were from the Santa Fe square the year every store was showing poppies. Then a quick stop at a store last week and a glance caught the sight of turquoise stems. Ah, the table colors take me back to the Southwest as I pass it each day. 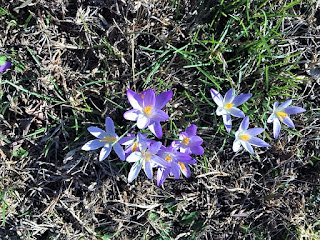 Meanwhile, I finally got the Christmas tea pot and cups put away along with the last poinsettias. I still felt it too early for Easter, but the warm weather here did remind me of spring. Yellow silks of forsythia and jonquils and tulips came out of the closet and made me feel bright as I could be. Then around the street corner I saw real crocus popping out all over the ground. Ah, their light shades of lavender were soft and full of promise.


Do you have a favorite color to wear or decorate with? 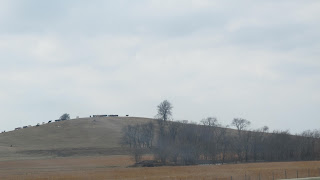 Despite the very mild weather thus far this winter, the days have been very hard for us at this house. My chemo has been so bad while my father-in-law died, his children are being nasty over estate, DH and I had to clean out the assisted living, we wrangle still with insurance over December fender bender, worry about our other family members, and well, I think you get the idea. Then last night I learned my Grand dog has incurable cancer. It seems unfair that my hardworking son faces cancer with both his dog and his mother. For someone who does not like to whine, I sure did a lot, didn’t I? 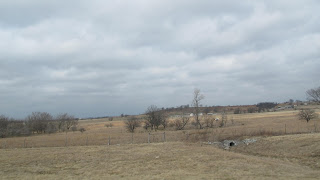 On Monday I had to do the week after blood cell check. The air was warm, but skies were as gray as a gun barrel. Blood labs were easy and cells were up for change. The office was shorthanded so it took longer, but when we came out, we did not want to come home. We had nowhere to go, nothing to do, did not feel great, but we just did not want to return to thinking of all our problems. So, we drove down I-44 a ways. 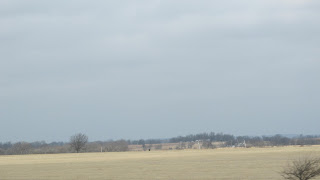 West is where we head in our hearts always it seems. We remembered past trips using this strip of highway to head to Santa Fe. We recalled the thrill of this highway in beginning our trips. Of course, this beginning strip of pavement brings back an era of my childhood memories as well. The winter landscape was bleak, but we worked hard at finding something promising. Occasionally we saw the hint of green coming in the winter wheat popping through. Hawks rested on fence poles; cattle lingered in dry pastures, some with calves. 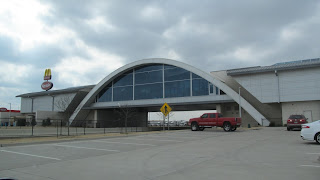 We only drove about 40 miles or so, but that took us to the Glass House! Over 50 years ago, the state of Oklahoma closed in a bridge over their turnpike and made it a place to eat. This was unique an architectural feat for the times. My grandma brought me a post card from her visit and my child’s eye longed to be see it in person. Later a McDonalds and nice gift shop was put in, but the place got a little shabby. Two years ago, it was redone and is now part of a truck plaza. Very clean and neat inside, it is simple but impressive to the child still inside of me. We stopped and ate a wonderful hamburger from the McDonalds while watching raging semi’s roar beneath our feet. 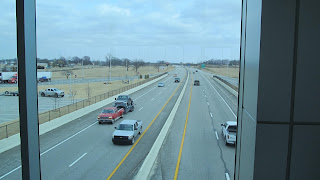 Then we turned around and headed home, but we used secondary roads, moseying along slowly postponing arrival back home. We did stop in Vinita (another childhood memory) to look around a flea market. It turned out to be an amazing place as the owner had tons of Blue Willow with some very old and unique pieces. She came down in price but still I didn’t buy. I told her if I could beat this cancer I would come back and buy a celebratory piece! She also had battled cancer twice.


From there, we had to come home. I was pretty done in and even DH was tiring. It doesn’t take much right now to wear us down. OH, but we had a little escape! For just a short while we could pretend that the world was all okay and that we were fine in it. Alas, when we walked in backdoor the answering machine was beeping, phone ringing, and email dinging. It brought us back from the past real fast.