So March is about to go out in a few day, hard to believe as it has gone so fast. March straddles winter and spring while the weather is confused as to where it does stand. It has been freezing with snow flurries only hours after the sunshine made temps hit 70! It is a month when I feel like a team of horses chomping at the bit, raring to pull out and go forward. But…the days don’t cooperate and I am locked down in winter-like routines, still cooking soup, using up the last of last season’s frozen produce, and utilizing the supply of dried beans.

Despite illnesses and such, there were a few moments of interest during this March. I worked hard at seeing and searching out some mind challenging things where I was at. I conjured up possible stories in my head. I ordered books on off the wall subjects like prostitution in the Old West (really!).

The exercise group tried to break the boredom rut by having lunch out one day. They choose to drive to Maggie Mae’s Tea Room in Miller, about 45 minutes away. It was a slow drive and full of pastures just beginning to hint of grass green shades.  Lunch and conversation were good followed by taking the long way home through small bergs like Lockwood and Avilla which suited me fine because a few minutes north and the land stretched into my beloved prairie. It is similar to land in Cedar County where some of my ancestors landed. The landscape and the Lockwood Main Street reminded me of days gone by which ignited stories of people and events that COULD have happened in the past. 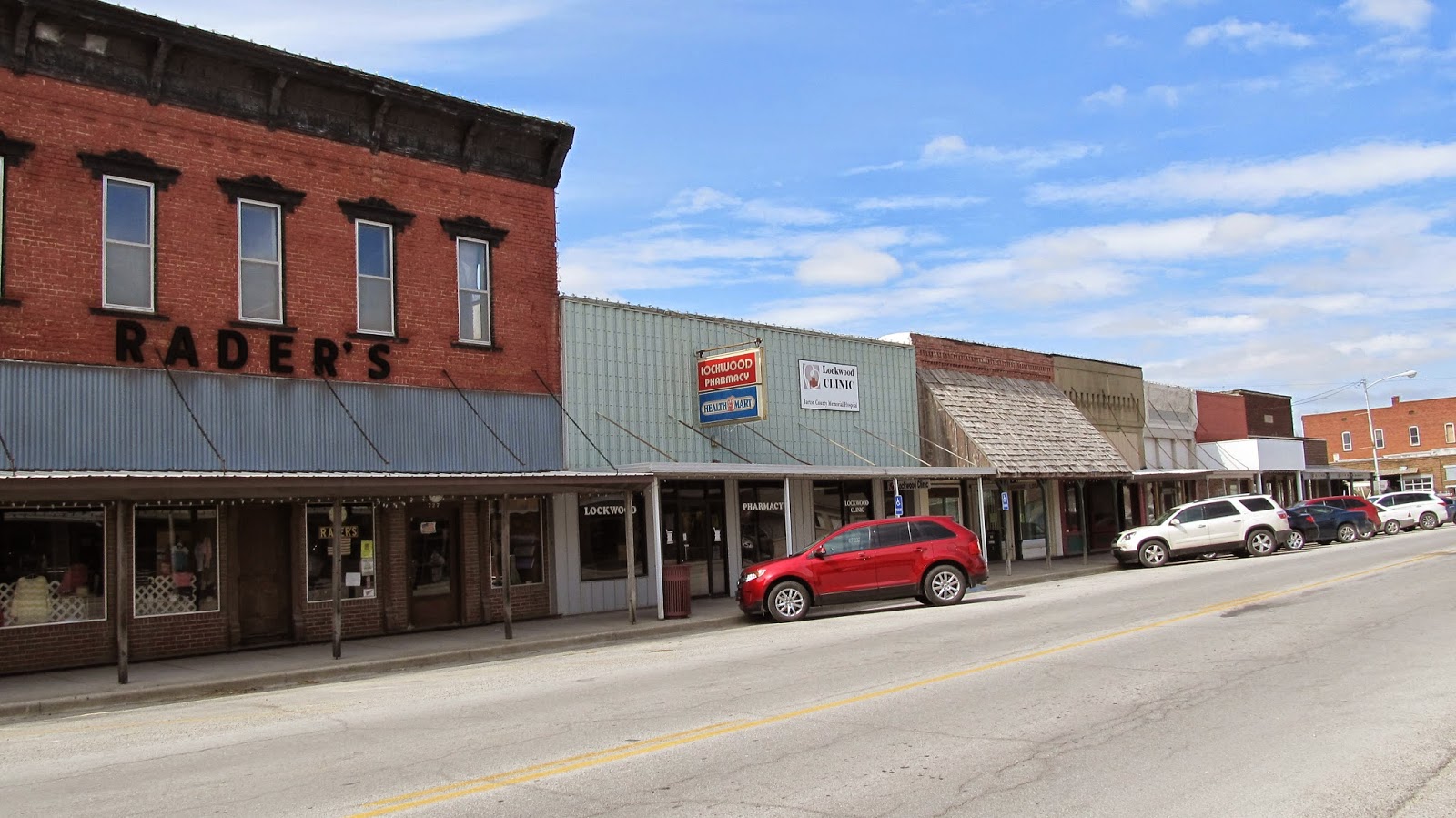 Last weekend we went to Jefferson City to see our oldest son and family. Illness and death hindered the weekend, but our son did take us for a drive about the city on the way to the park with children. Missouri’s capitol is a beauty for sure! The nearby river reeks of stories and history. The old state petitionary is now giving guided tours for tourists. I want to go! There were 11,000 visitors taking the tour in 2011. Think of the stories THESE walls could tell. Immediately I loaded a small book about the Missouri State Petitionary onto my Kindle and began to read. Amazing history happened behind the walls. I met Kate Richards O’Hare on the page and ordered a book about her too. She was from Kansas, imprisoned in Missouri, and spent rest of her life fighting for women’s and children’s rights. 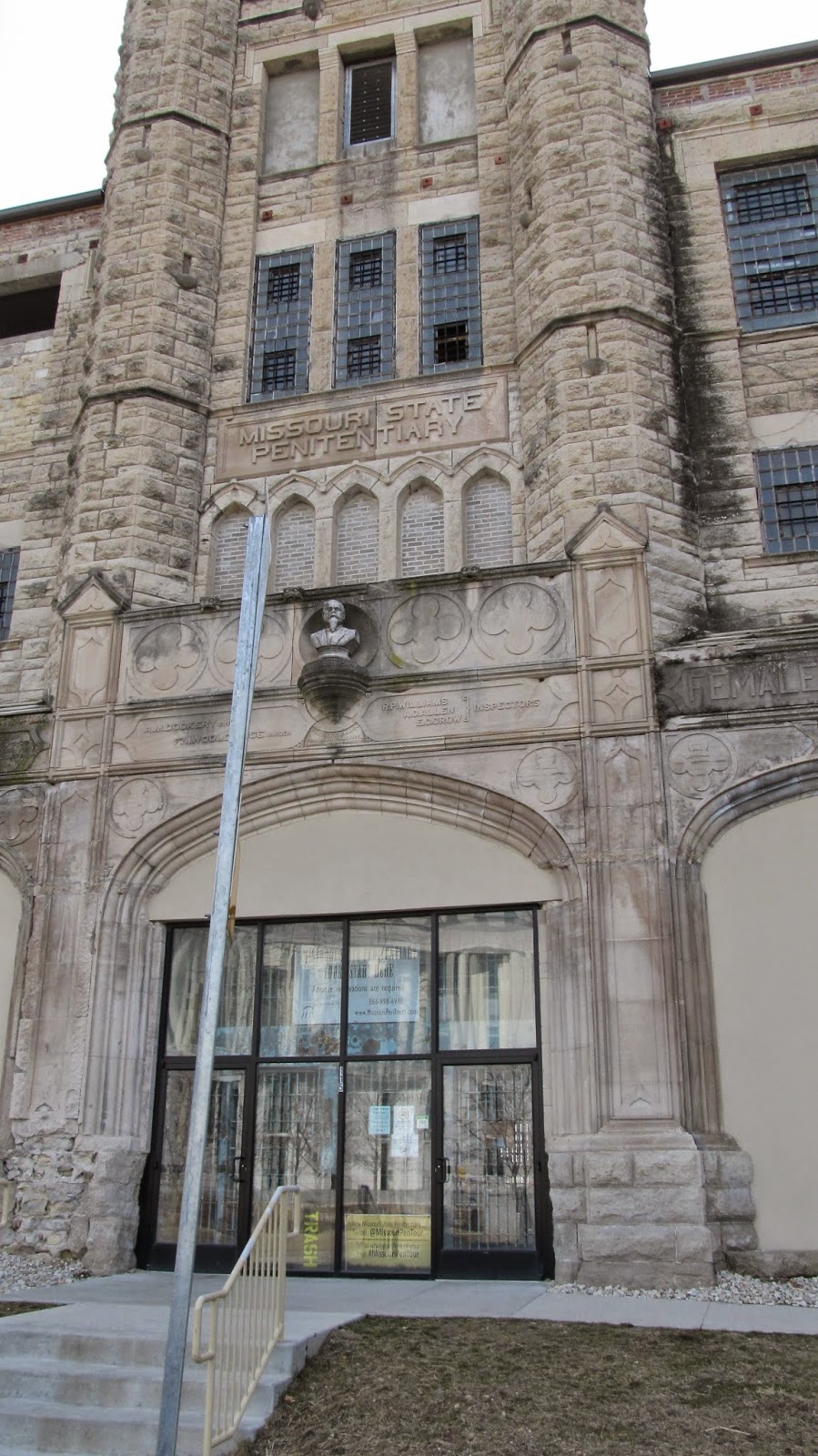 This morning we spent a fortune on lampshades, pillows, office supplies, deck sealer, and weed killer. It was a little too chilly to begin spring projects but we could be ready! We also picked up the video of Imitation Game to watch between March Madness basketball. It is a fantastic movie and I am thrilled to finally have seen it this afternoon. 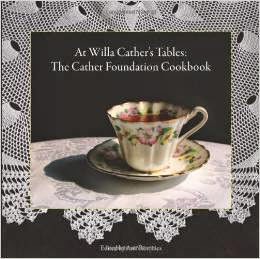 Isn 't this a lovely cover? Lace and tea!

In today’s mail, a new book arrived! This is a cookbook put out by the Willa Cather Foundation. It has recipes but also pictures and tidbits from author Willa Cather’s life. I have been to Red Cloud, Nebraska…beautiful prairie land where Cather sets her stories…but I am ready to go again. I think it might happen this summer.

So tonight when basket balls hit the court again, I will tuck myself  in warm flannel to read and dream. Tomorrow the weather is to be sunny and rather warm. I intend to brew tea, dream up stories and practice my deck setting in anticipation of real spring and warmer days!

*****************
I am getting complaints that readers can't leave comments. Are you having trouble? Should I give up on Blogger and go to Word Press? Email me at bookwoman1015 at sbcglobal.net if need be.

Trying for a Fresh Start with Spring

It has been 20 days since I posted on my blog, the longest quiet period since I started. I am not sure why I became quiet, but a series of burdens, slight illnesses, responsibilities, etc. consumed my days. Then added to that the lack of anything interesting to say, and well, the blog page was quiet. I still have nothing worth much to say, but I want to move back to blogging again.

Writing…at somewhat of a standstill. Ideas, yes; energy and time to develop, no. A few rejections rolling in, but still a lot of submissions out there to axed yet!
Family Life…full of issues but holding. We did get to see our grands!
Health…full of rocky situations but nothing traumatic thus far.
Friends…always valuable and cherished, just not the time to relish time together due to so many varied schedules.
Reading…doing some but finding it slow. Some good books but my mind wanders and twists like a snake crossing the highway.
Travel…other than seeing family, there has been none. But if we get on top of things, we have hopes for pointing the Ruby Slipper to the highway! 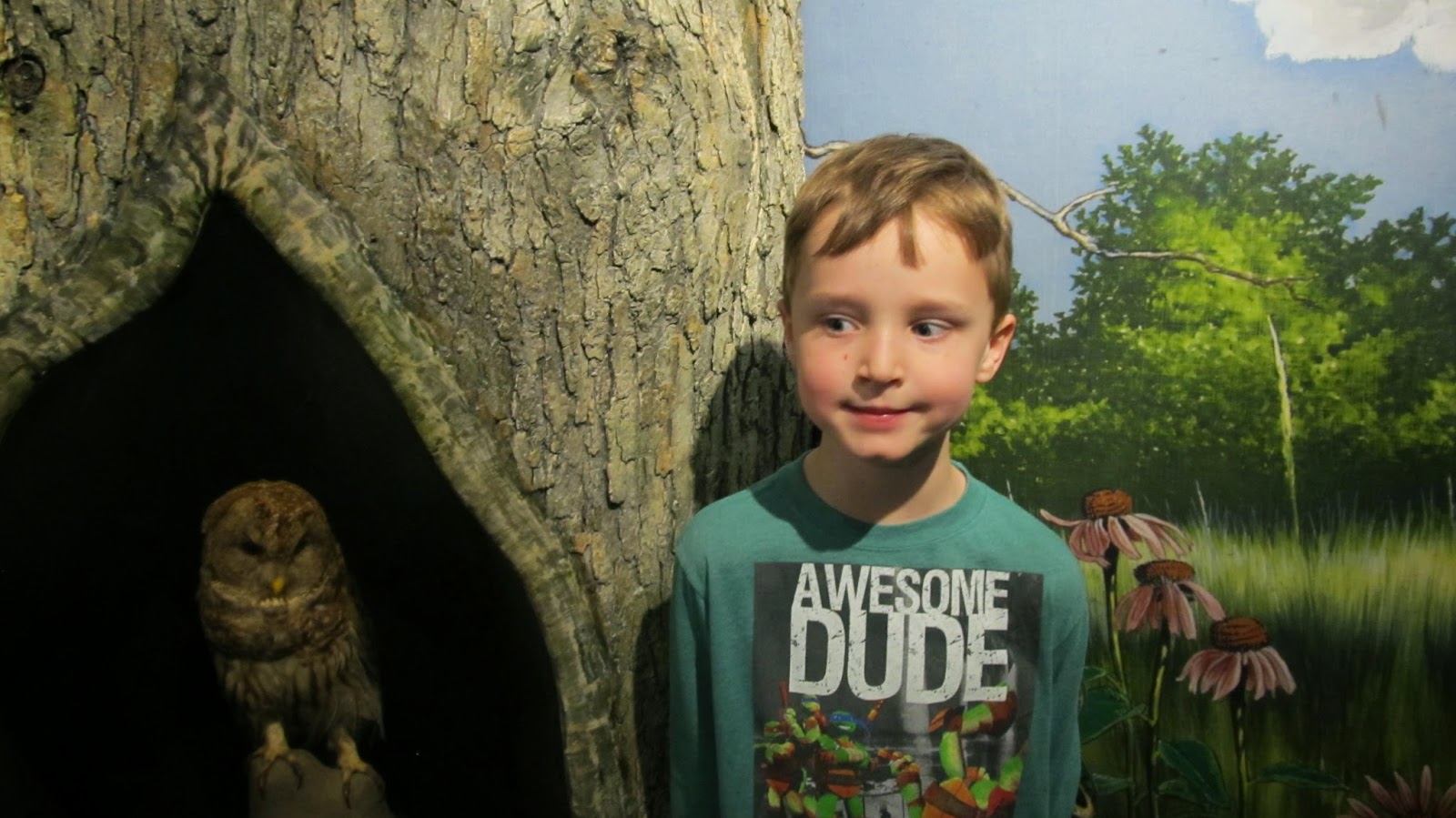 Our children and grands have returned to Jefferson City. Oh my, a drive of four hours is so much better than the twelve hour to Northern Kentucky. Still it is a task when you aren’t feeling up to par. It is the first time in six years we have taken those particular roads, and the beauty of central Missouri always amazes me. The rolling hills with deep vales just now turning a bit of lime shade were delightful to see. 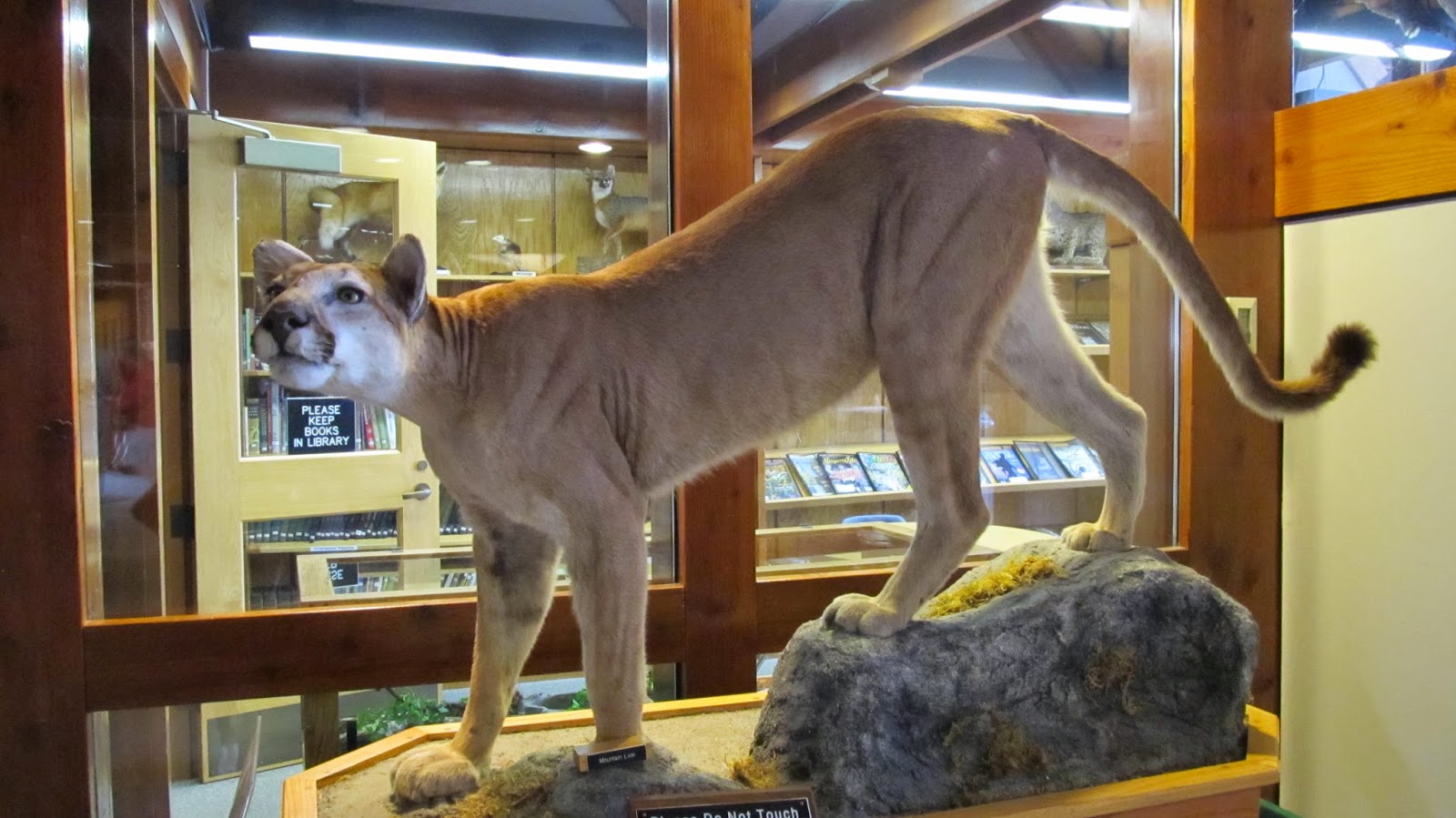 Besides a drive around the city, a trip to the park, and making ice cream in a plastic bag (my son says this is a grandma only thing!), we took the kids to Runge Conservation Center. The four year old is still too young and put everyone through the patience test. But this was a great place for children and very busy on a perfect spring weekend with families.
Grammie was impressed by this lion in Missouri! It was hit by a car near Fulton on Highway 54 in 2003. It weighed over a hundred pounds. The animal is gorgeous and sleek, but I have no desire to meet him in the wild! Look at those feet! 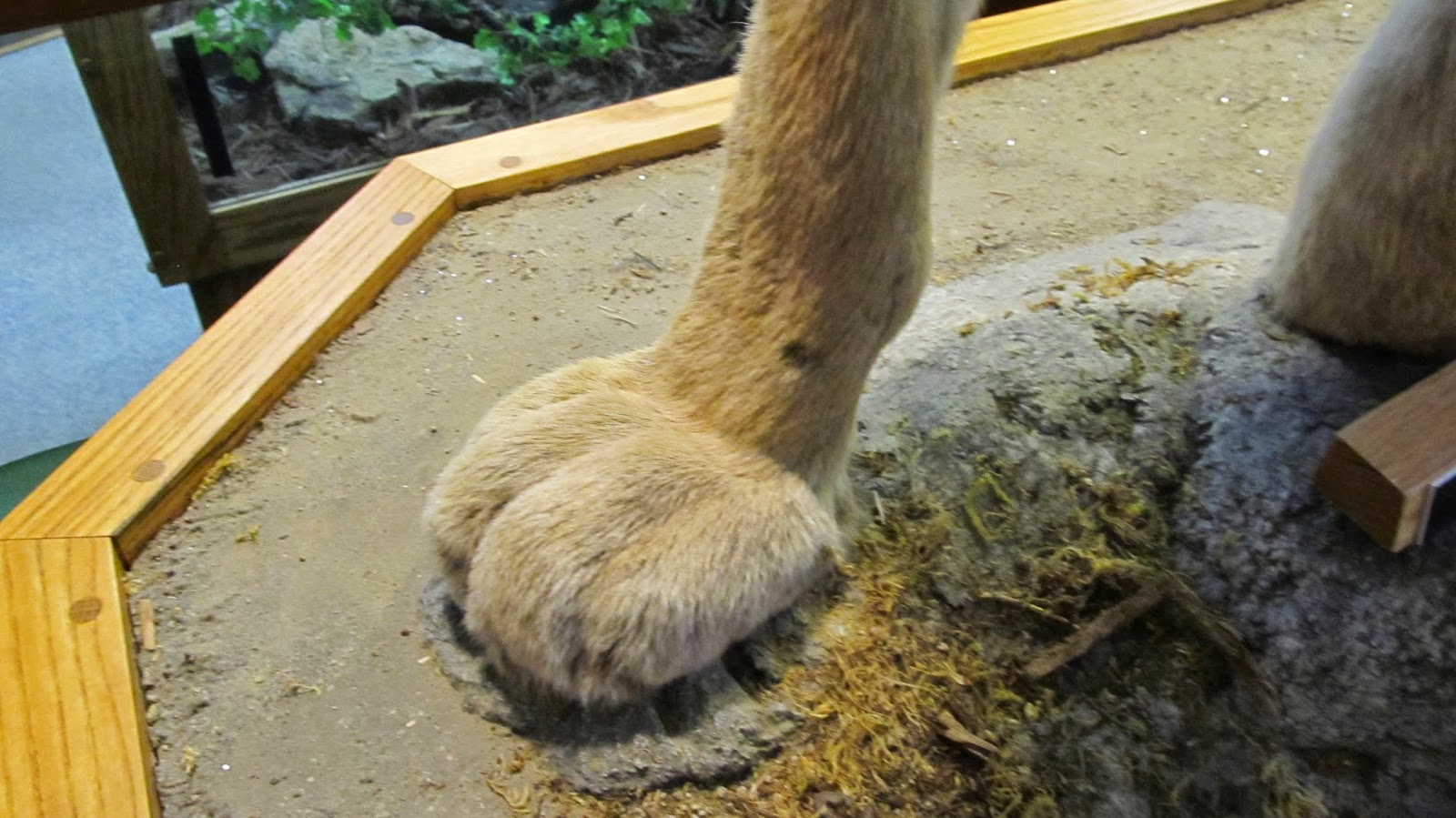 Spring is definitely here on the calendar and beginning to show signs of coming to maturity. Tomorrow we are to have storms here with possible hail and wind. This is the part of spring I do not like. But, we take the good with the bad in all things.
Posted by Bookie at 5:42 PM 5 comments: 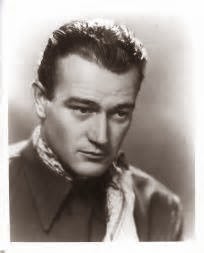 The last couple of snows that buried streets and porches in the neighborhood allowed me to bury myself in a 600 page doorstop book. A year and half ago when the comprehensive bio of John Wayne by Scott Eyman hit the stores, I wanted it. But at $32.50 for a movie star bio, I backed off. I had read star stories before that disappointed. While I expected this one to be good, still I was wary. Finally I picked up a used hardcover for $3.50 a couple of weeks ago. I was not disappointed!
If you are of a certain age, movies, particularly westerns, patriotism, strong moral values, heroes, and humans of mythic proportions are things you can relate to. I was brought up in schools where Lincoln and Washington portraits hung in every classroom and Presidents’ Day was celebrated by cutting out silhouettes of the men, of great stories about their deeds, and even songs sung to remember their era. Cutting down a cherry tree became a lesson of Biblical stature. 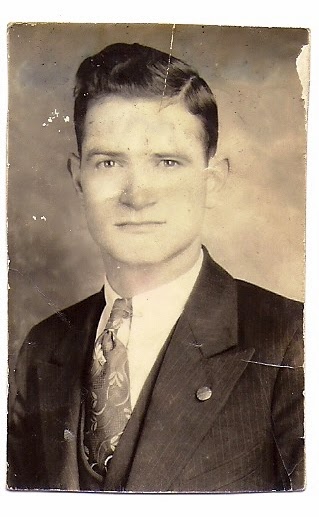 I loved John Wayne and figured a read through his life would return me, on the page anyway, to a time when things like loyalty, generosity, integrity, and self-reliance were still in place. Oh, and it did! Eyman doesn’t make John Wayne appear as a giant; he lets readers see the man WAS a giant through his own deeds and character. Nor does Eyman closet the flaws and warts of Duke Morrison--the man who was John Wayne. My only criticism of the book is that the author was very heavy on each film’s budget, over-budget, financing, and profits. Important to some people I am sure, but I just wanted stories about John Wayne the man.

Duke Morrison was born in the Midwest and carried conservative political stands, but he was a kind, caring, forgiving man who was known as a Man’s Man. He appreciated women but was not successful at marriage. He repeatedly chose the wrong woman maybe because his own mother was a harsh, demanding and unloving woman. He was educated; read poetry; quoted Shakespeare, and yet his persona was one of tough old cowboy. He worked hard, crawled up the success ladder one rung at a time.

Eyman takes readers from his early Grade B westerns right through his last movie, The Shootist. It is a fun tour when you can remember many of those movies coming out in theaters and have watched some numerous times in John Wayne celebrations on HBO or late night old movie showings. DH and I got a load and watched during the snows. We found some we had never seen before like Reap the Wild Wind and Island in the Sun, but of course, we watched Rio Bravo again too!

John Wayne was a huge man. My paternal grandfather was built like him standing 6’4” himself. Gramps had the same full chest, long arms, and slender legs with a flat backside. He walked that same easy swagger of big men who tend to throw their limbs ahead of their bodies. Gramps, who always regretted being born at the end of the cowboy era, kept and rode horses, had a selection of great cowboy hats, and his best boots often peaked out of his nice suit pants. It wasn’t a far reach for a western loving child to see him as cut like John Wayne.

However, when I was in high school, my Gramps and Dad went to buy a bird dog pup from a friend’s dad. At school on Monday she greeted me with, “Why didn’t you tell me your grandpa looked like John Wayne?”  I never thought about it much but then I saw that in youth and again in their mid-50’s there was a resemblance between the men. They died two years apart. 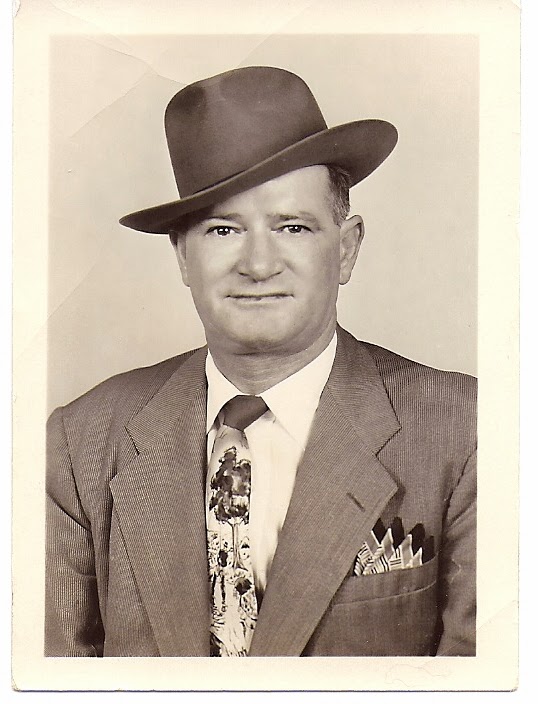 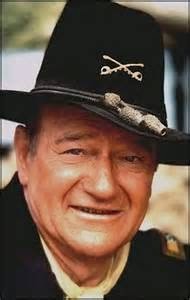 There are so many sides to John Wayne that readers should pour over John Wayne: The Life and Legend themselves to get all the details. It is a great return to yesteryear where one can almost smell leather and hear the squeak of a stretching stirrup under a big man. For me, it felt really good back to a world I once knew. On the last pages, I felt big salty tears forming. Sure, I knew the ending of this story, but I was still sad to lose a great man once more.

Words on Duke Morrison/John Wayne gravestone captures the man’s outlook on life and gives the rest of us something to think about.


“Tomorrow is the most important thing in life. Comes to us at midnight very clean. It’s perfect when it arrives and puts itself in our hands. It hopes we’ve learned something from yesterday.”

Not everyone liked or respected John Wayne though most did. How about you? A John Wayne fan?
Posted by Bookie at 12:03 PM 7 comments: