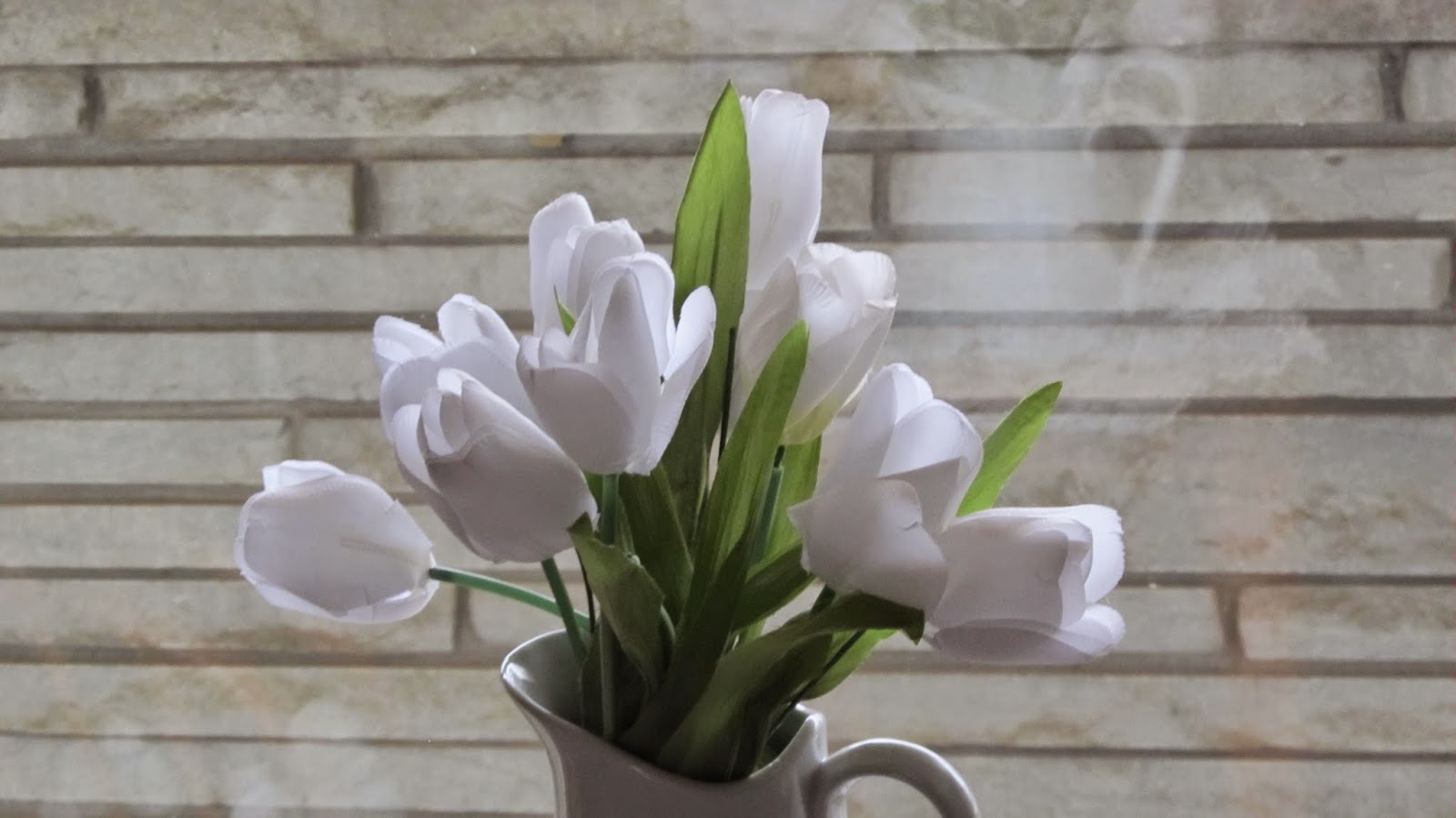 Here we are on the threshold of a new year. I am quite ready to move on, to put 2014 to rest. There was no tree here this year and I have already stored the Santas again. I did leave out some snowmen and a favorite winter tea pot. I also set out white tulips which is something my mother-in-law did for January every year. I also found a place for three peasant dolls she made years ago. She was one of three sisters, and I always wondered if she thought of them as she stitched up these dolls. 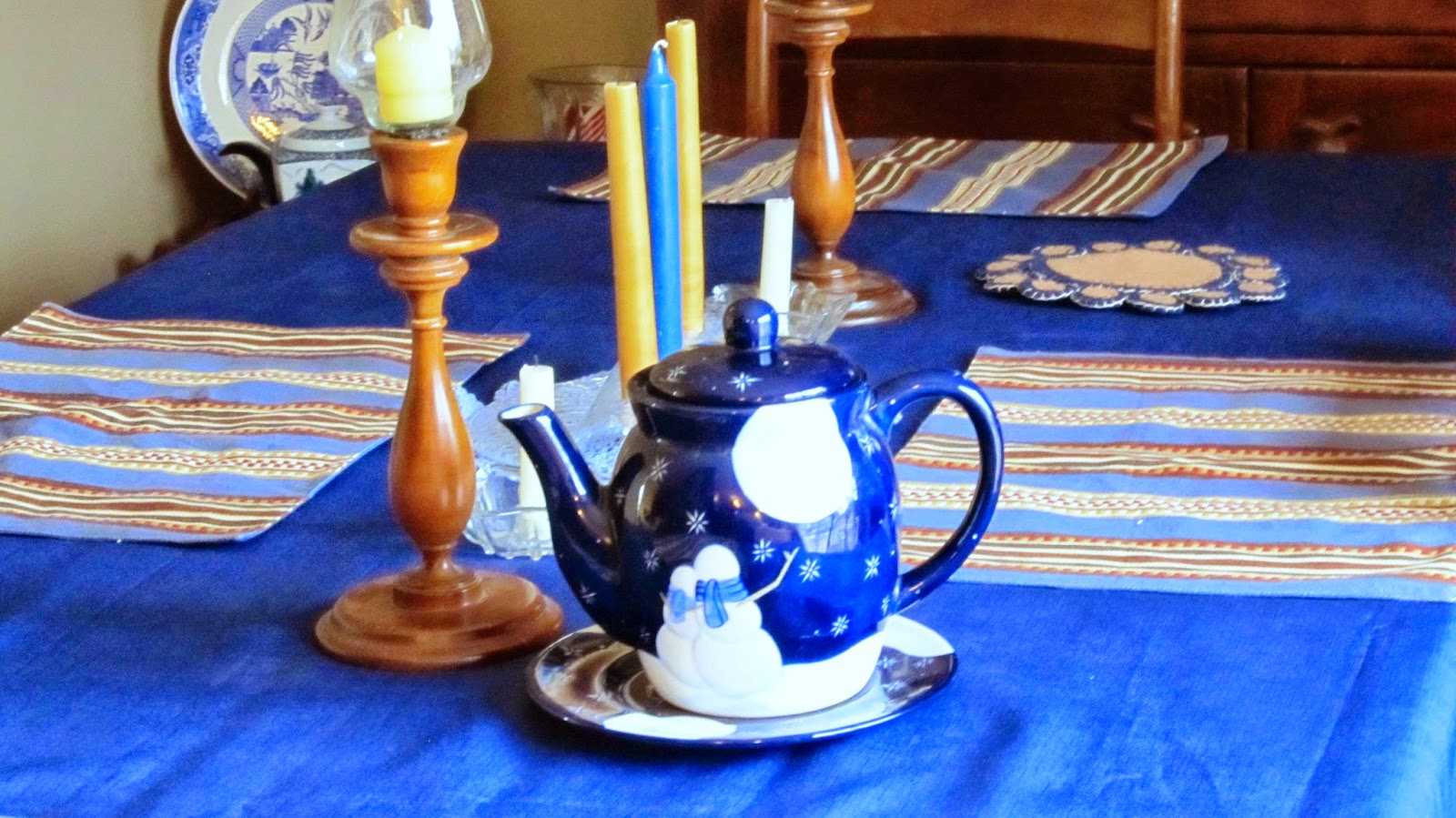 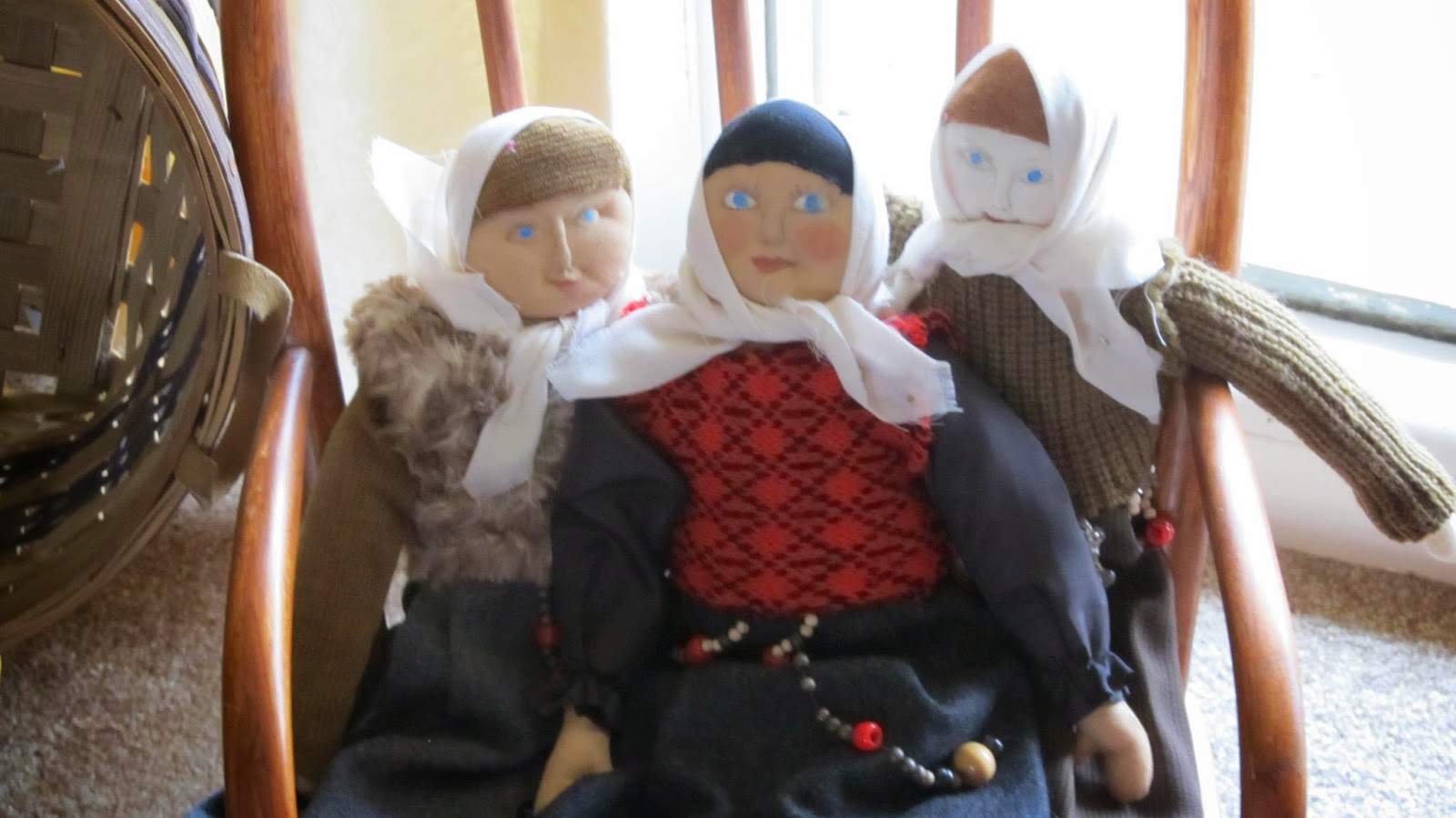 Our house was back in order by Christmas which was a relief. There are a few things left to tend to…some things to find that were stored and seem to have vanished in a cardboard box somewhere deep in a closet! However, my mother-in-law fell and broke her hip for Christmas which changed travel plans and the day’s events. Also my mother was so sick with flu she would not have us in, but passed gifts through the door. It was also the first Christmas after my sister’s divorce and the pain was still palpable in the room despite gift wrapping and bows and good things. I now truly understand the elephant in the room concept. 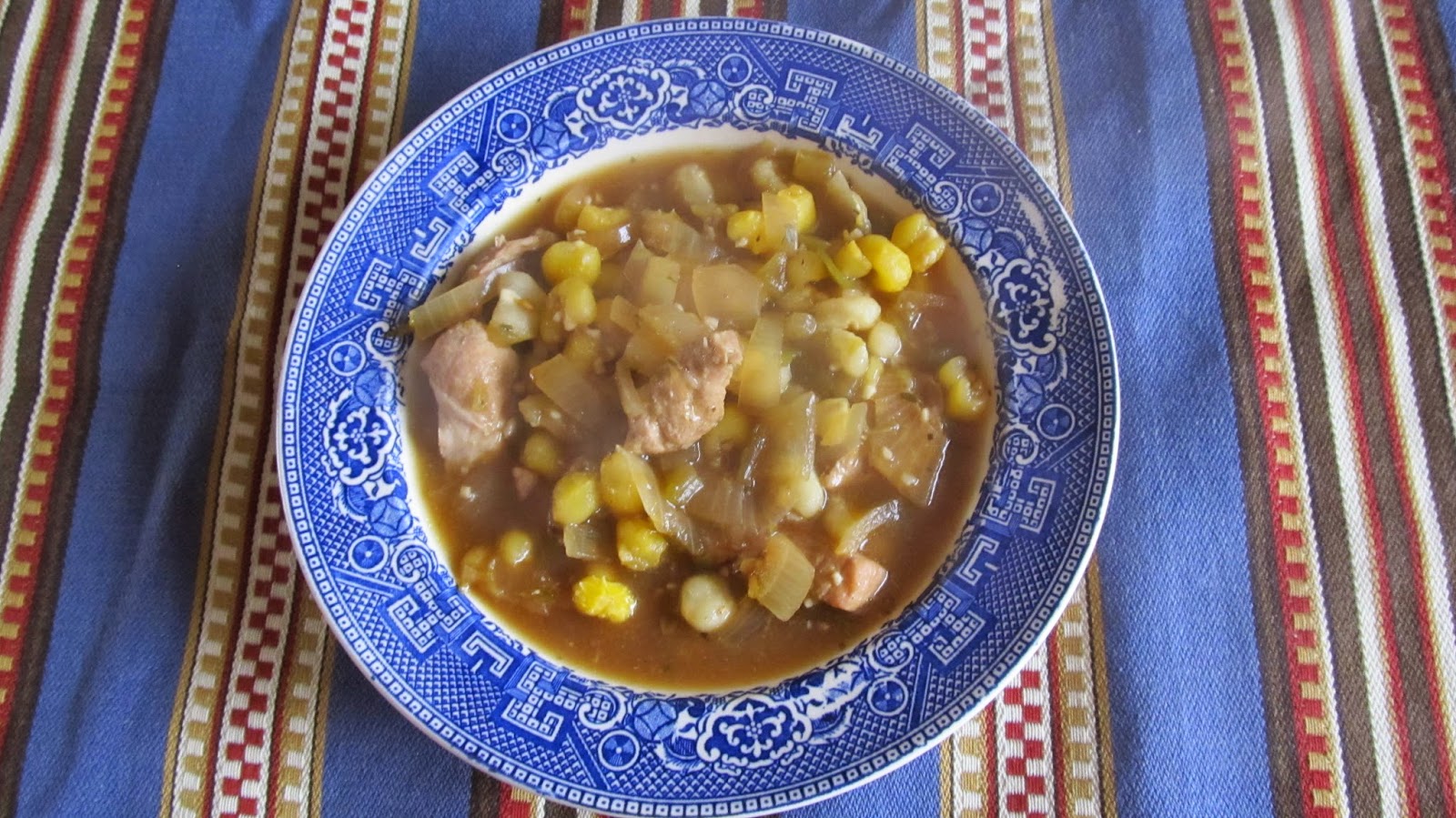 But we are now ready to move on. Time to return to routines…exercise, work, cleaning, writing, eating right…the list of shoulds goes on and on. The house smells wonderful this morning as the fragrance of posole loaded with onions and green chilies floats through the rooms. It slowly replaces the aroma of Christmas cinnamon, chocolate and sugar. The windows steam as it is cold outside. I have a new book for inspiring writing that I’ve  hoarded for a special time to break open the cover. The title alone is a shocker: Bullies, Bastards, and Bitches. It is about writing the bad guys! 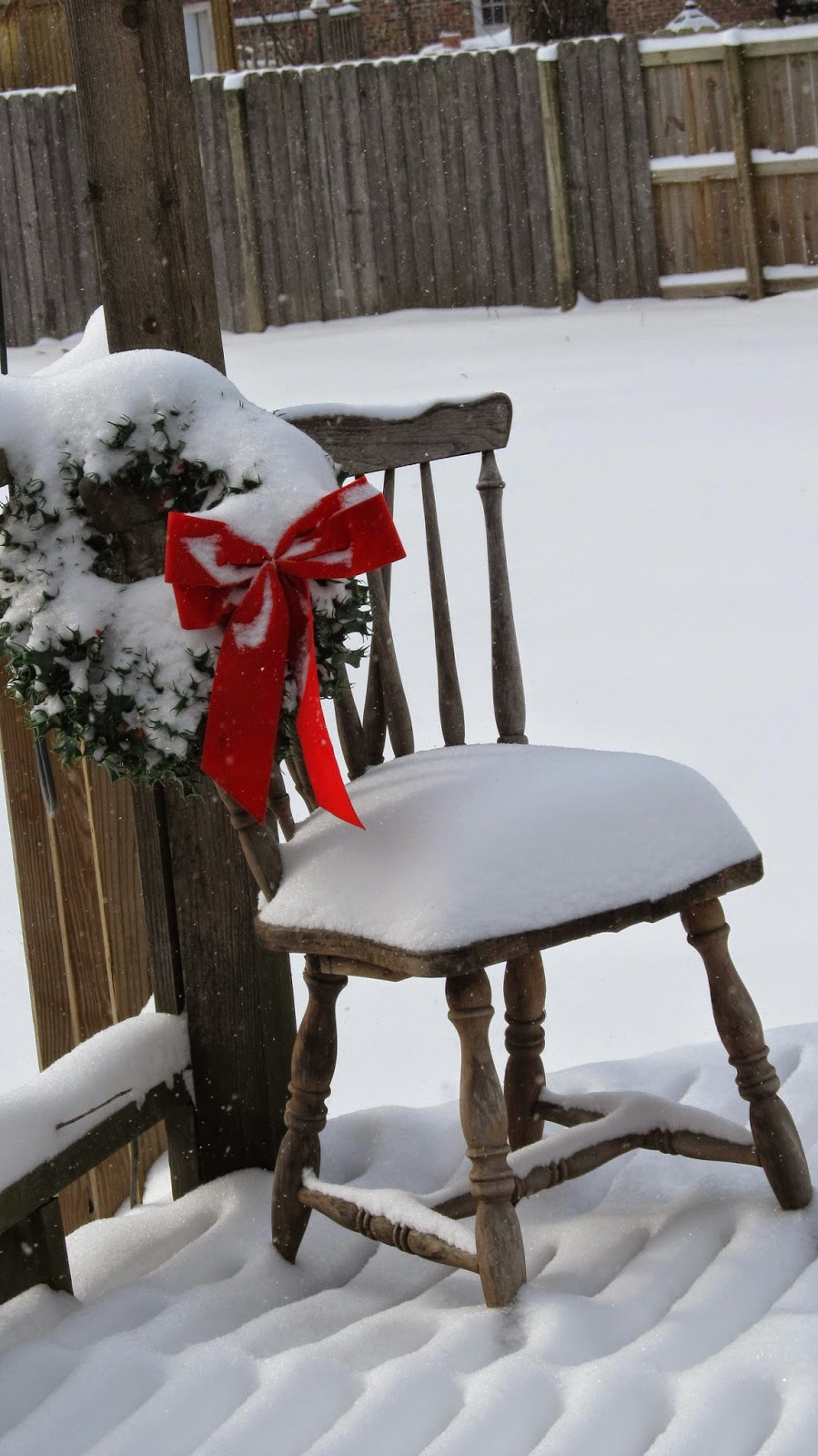 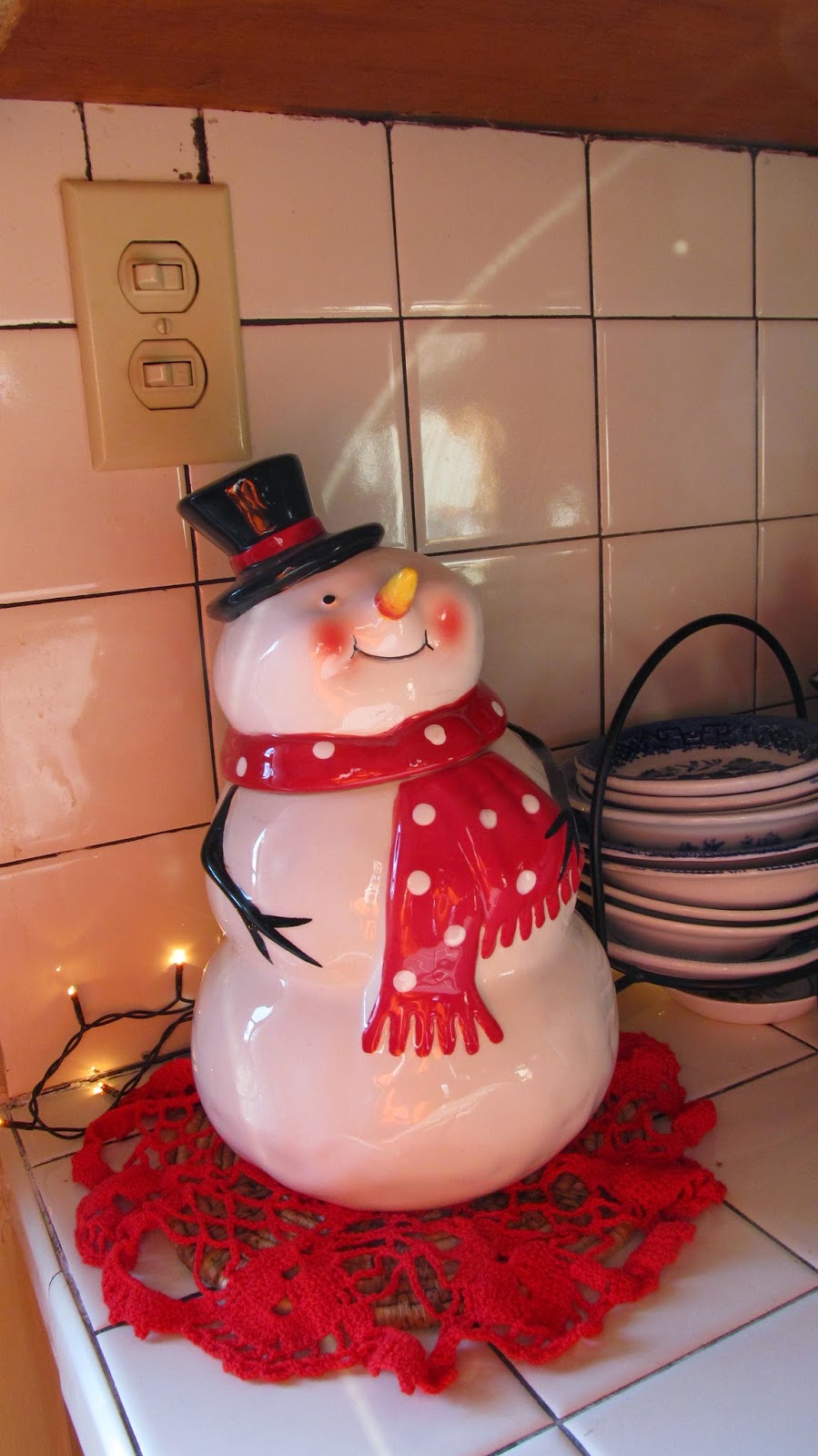 I think after working on the washing machine Saturday we are nearly back to order around here. Still a box or two…cabinets still draw clutter to be moved each day. I am not putting up tree or outside lights this year. Just too tired of putting and taking down! But I did put out a few seasonal things. 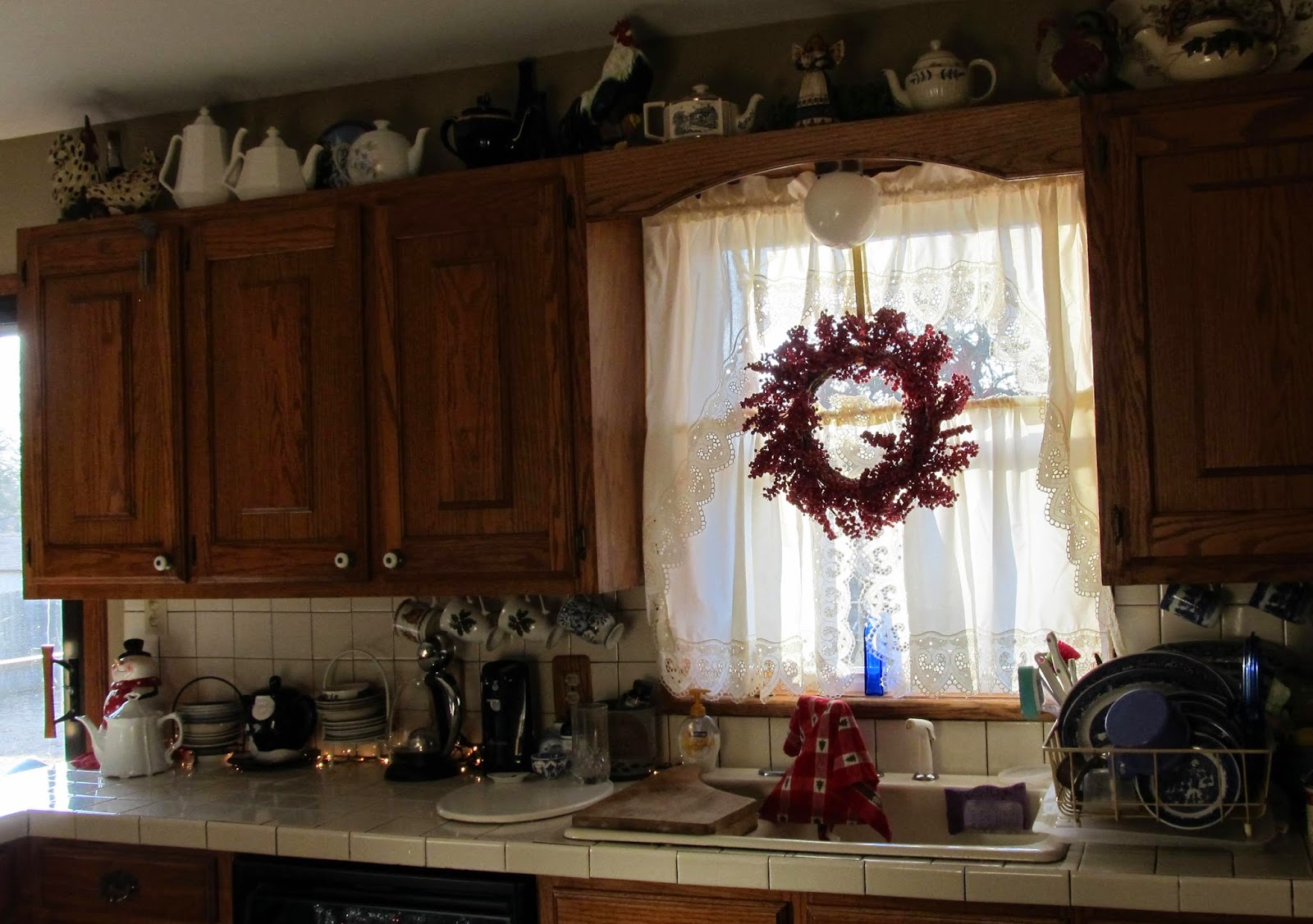 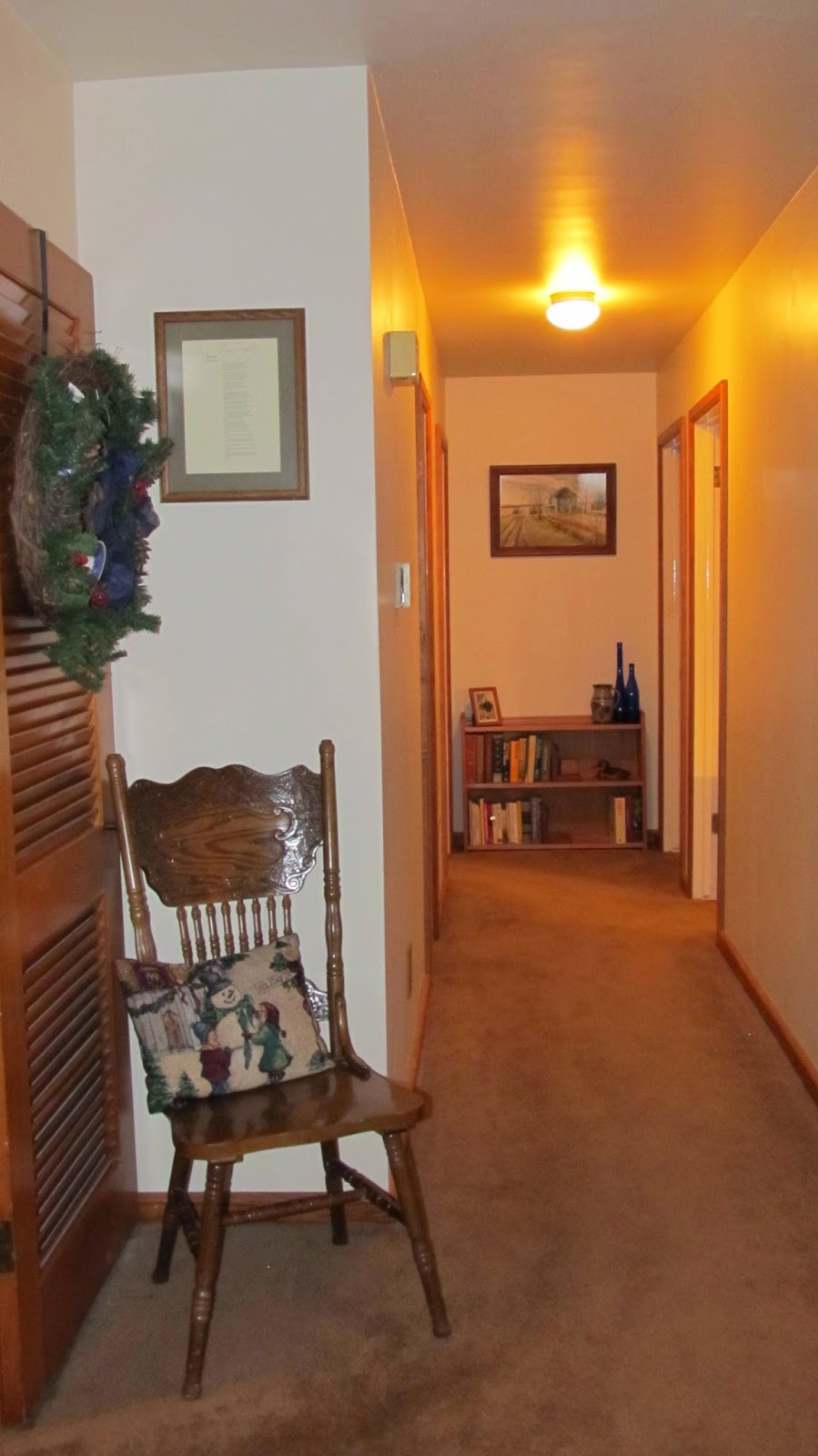 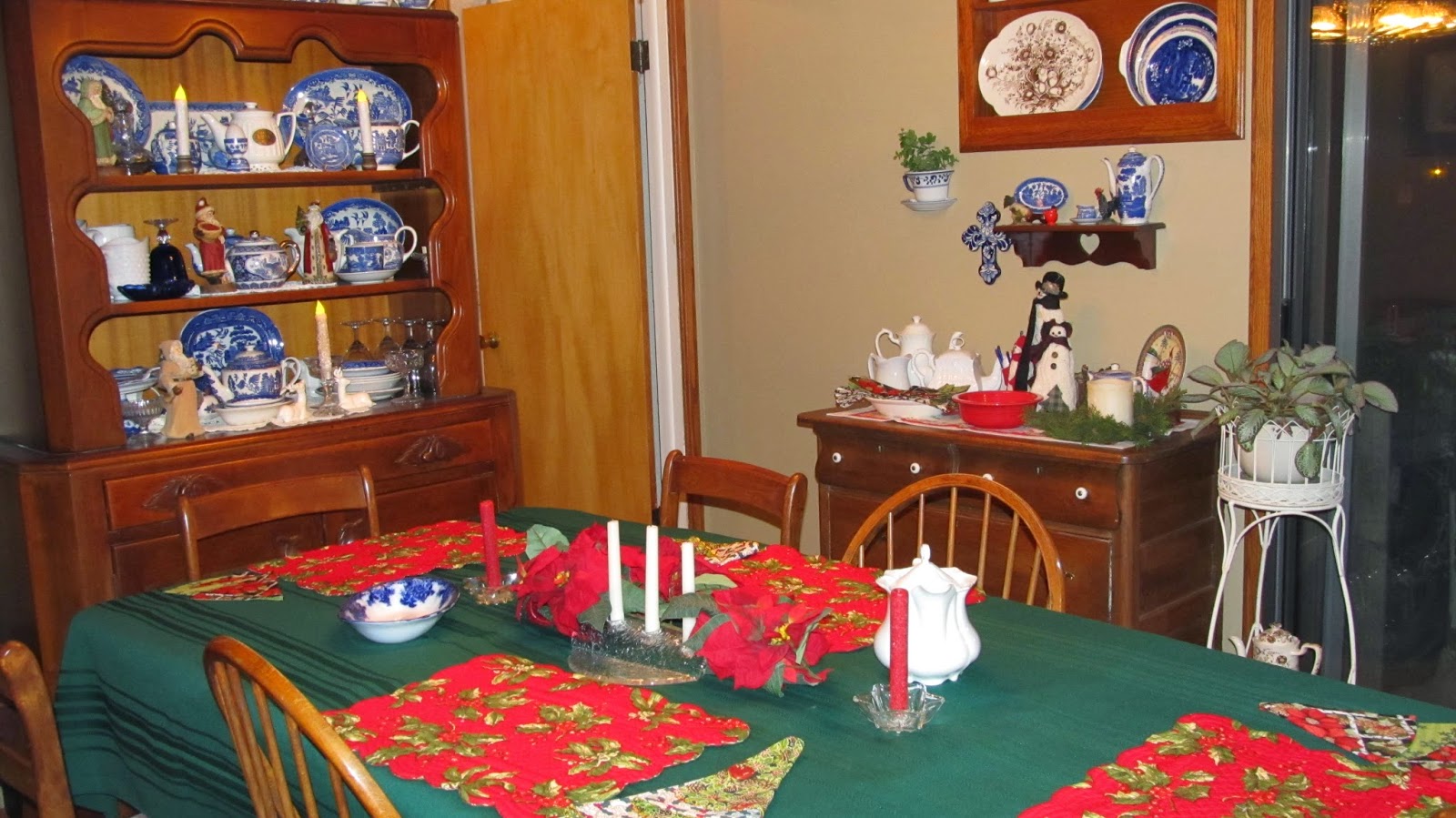 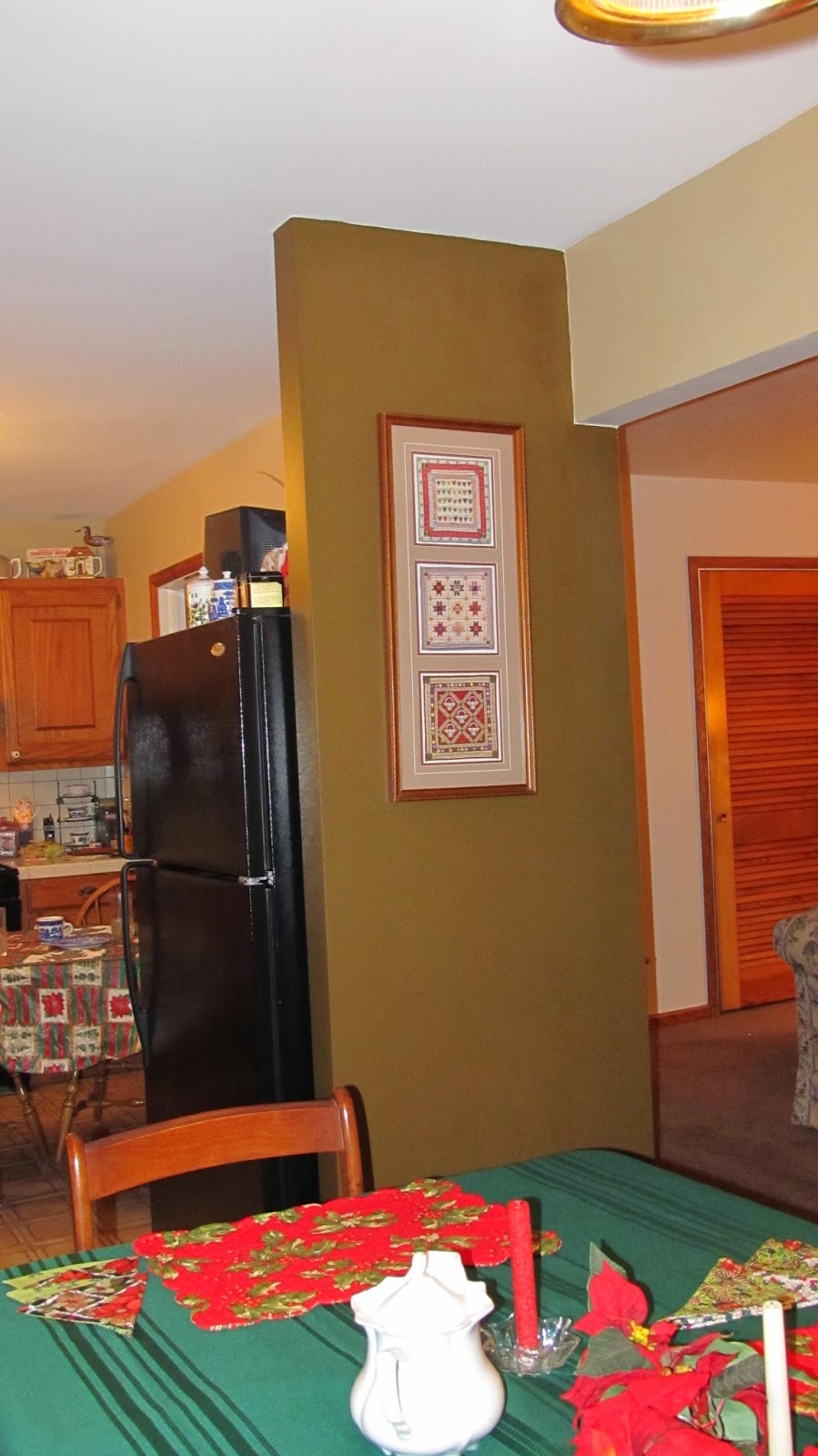 The colors of walls do not show well in pictures. The half wall is very dark brown and dining walls are latte colored, not green! I was afraid so much brown would overshadow the Blue Willow, but that is not the case. Although plenty sits out, I left a few things boxed for a while…to rest the eyes from so much stuff.

Now on with December.
Posted by Bookie at 6:14 PM 9 comments:

A Day of Respite 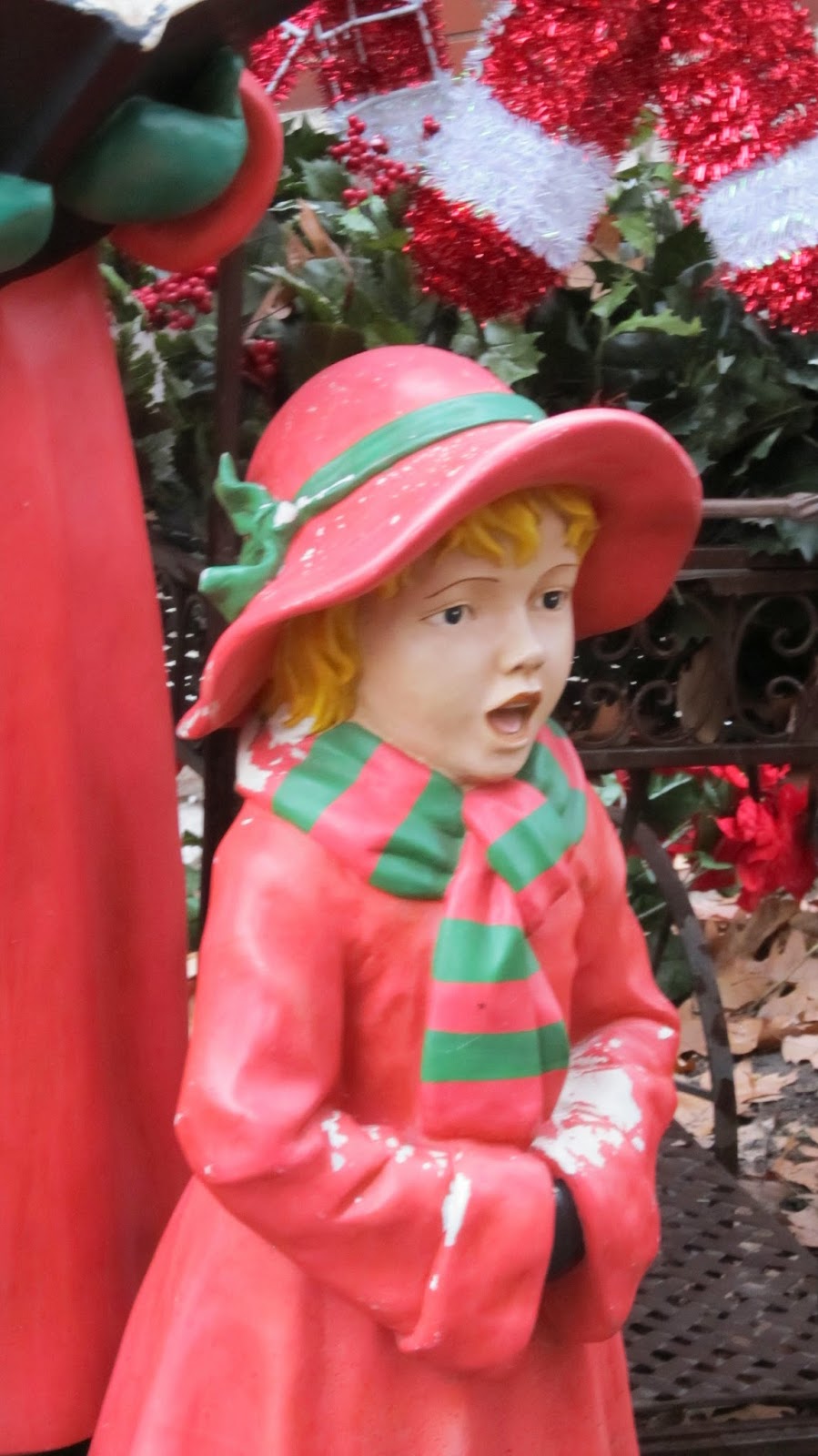 DH never gets excited over Christmas, hates Christmas music, finds winter disgusting, and abhors shopping so it has been a surprise to me that for three years he has expressed the desire to see St. Charles, Missouri at night while decorated for Christmas. This autumn he asked to put it on the calendar this year. So I made a one day plan for meeting our Sunset Hills friends there for the day.

When this agreeable wife also agreed to the Ceiling Project from Hell and it ran six weeks long, I thought we should skip the mini-trip. But after the carpet was stretched and steam cleaned it had to dry anyway so we took out for the East. Then we learned our friends had been sick with a virus and had to pass on a cold Christmas walk. 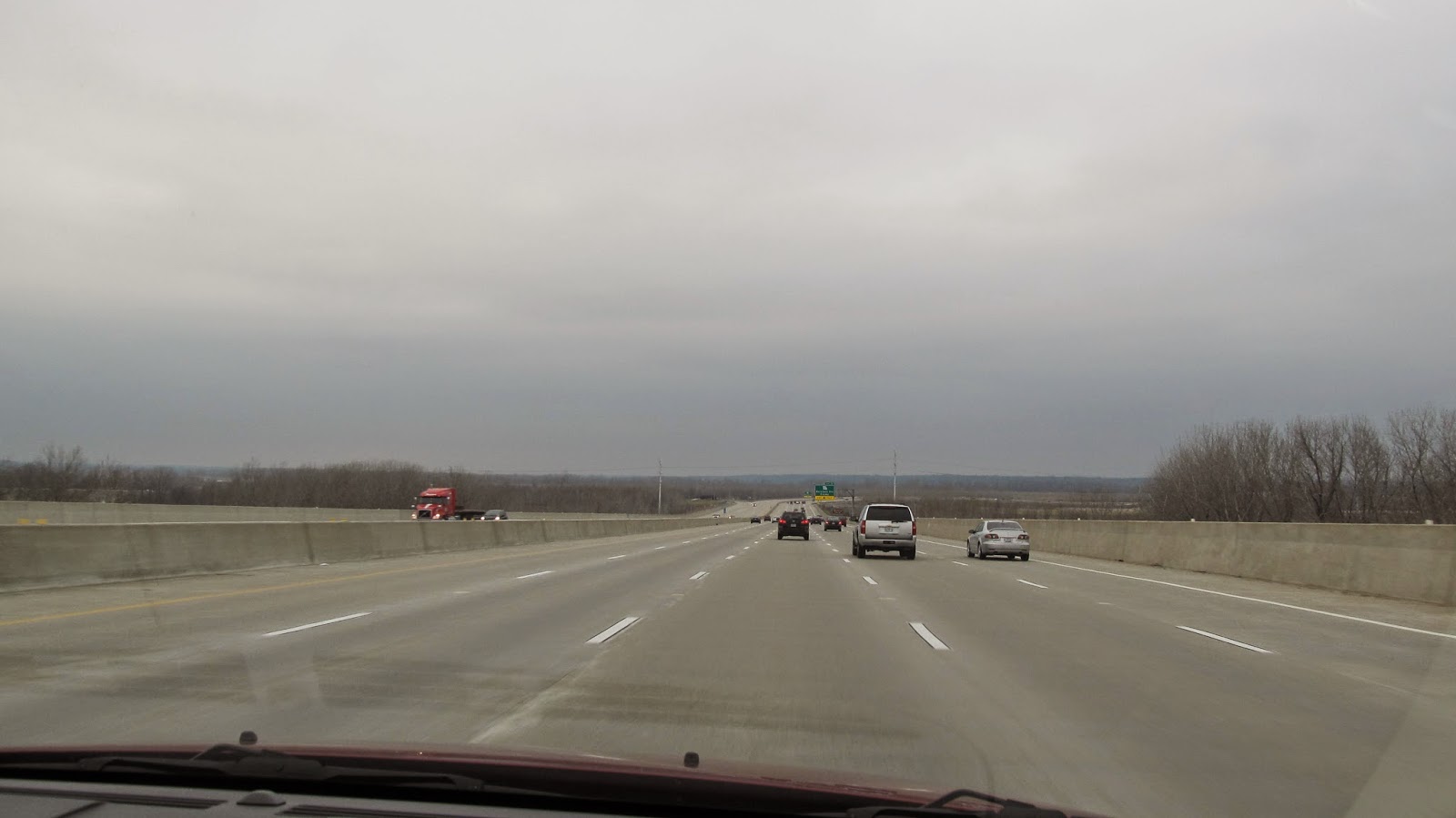 We went anyway with a weather report of maybe hitting 50 degrees. That didn’t happen. The closer we got to the St. Louis area, the darker the skies. It never hit 40. The skies were so dark I felt like a heavy ceiling was about to fall on my head….a ceiling again! But we arrived at the Drury with no near mishaps on I-44. It had been restful driving with some music and sitting without knee deep sheetrock dust.

The next morning we had a nice Drury breakfast. Motel breakfasts are not superb but Drury does well, and frankly even tasteless gravy can please me if I don’t have to make it and I can walk away from the mess. We waited for the rush hour to be over and then eased ourselves down to The Hill, the Italian area of St. Louis. It was another dark and cold day but no wind so walking in and out of those wonderful Italian grocery stores was pleasant. The shelves are crowded with brightly colored cans of olives and tomatoes along with numerous brands of attractive bottles filled with golden olive oil. The spices are fragrant, and oh, the smell of that pungent salami! We bought frozen raviolis and bags of ice to bring it home, a load of pasta for winter. I bought a jar of garlic pepper that I hope will do two things: 1) Lure DH into eating a wee bit more pepper, and 2) ease us away from some salt. 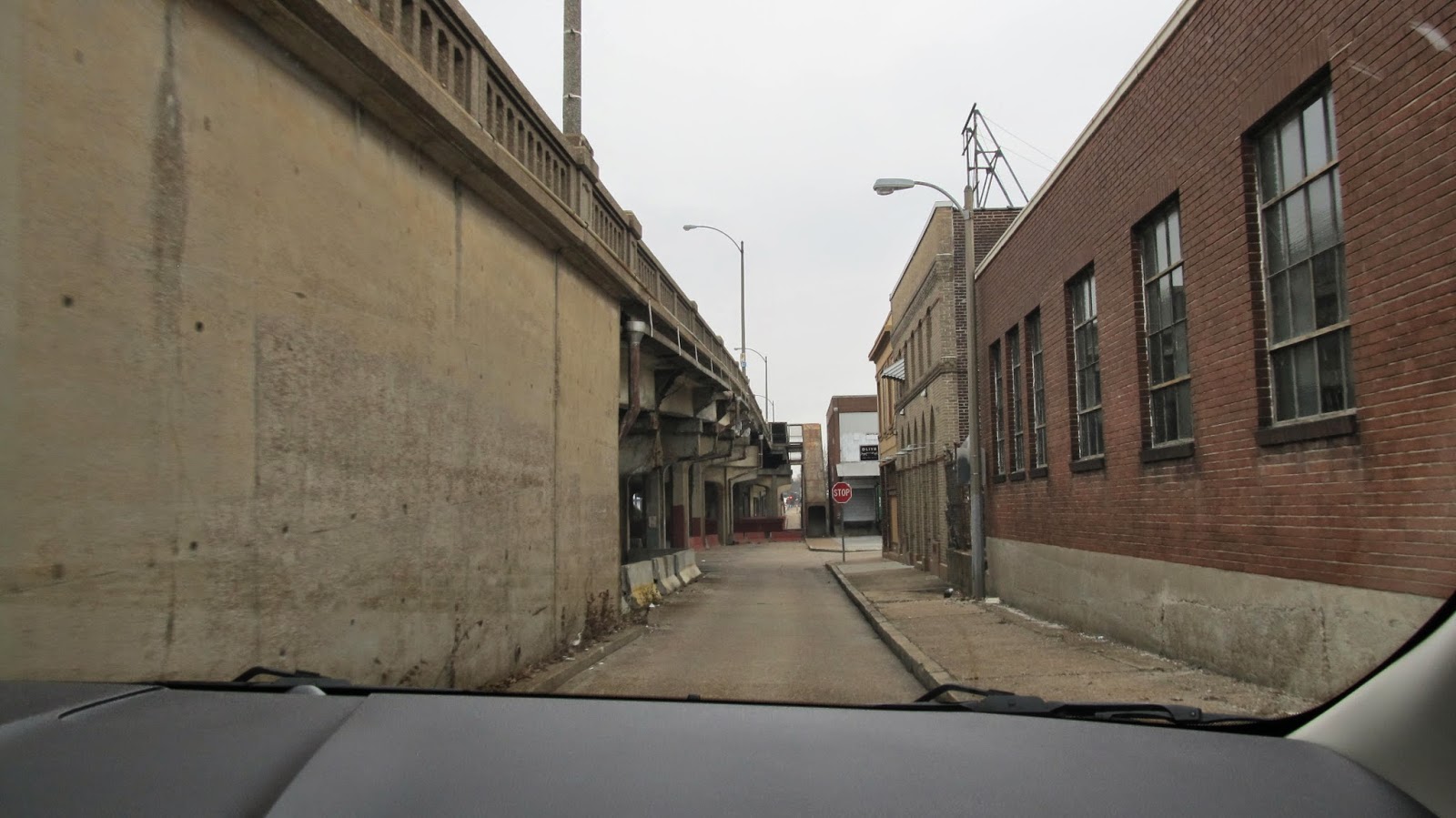 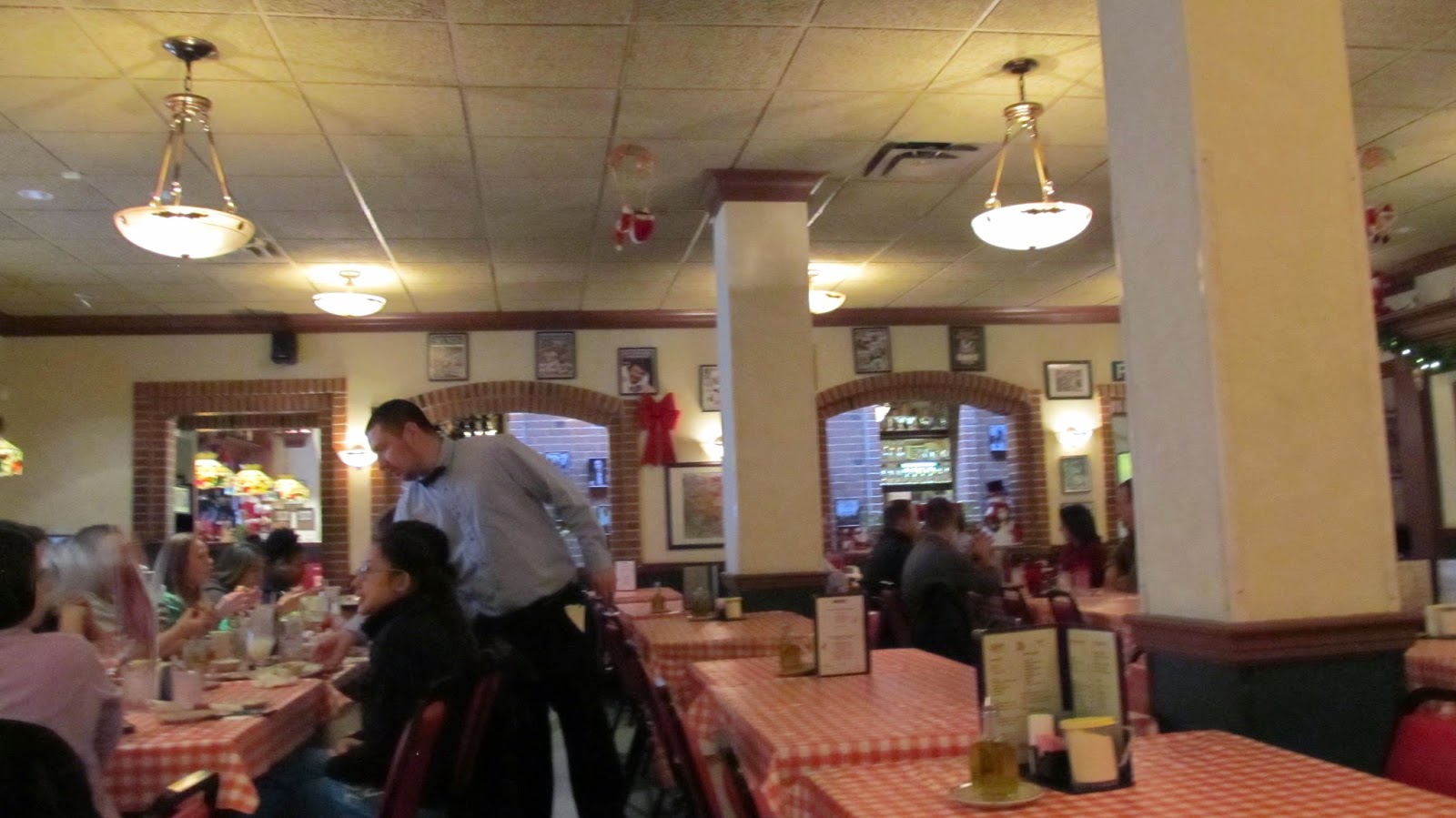 Then we ate a great lunch at Ragazzi’s, a place we found last summer. DH asked if I wanted to try some place new, but I wanted to go back to this place famous for their fried ravioli. We found it with ease and it is not a flamboyant place, in fact it is stuck near an old viaduct and train yard. One feels like black sedans carrying Al Capone might show up any minute. But once inside food is wonderful. Some student nurses were celebrating having finished a heavy final and many other diners were filtering in. I ordered the fried ravioli appetizer with a small salad instead of a meal. The salad was as wonderful as their ravioli and their idea of small was way larger than I could have imagined. 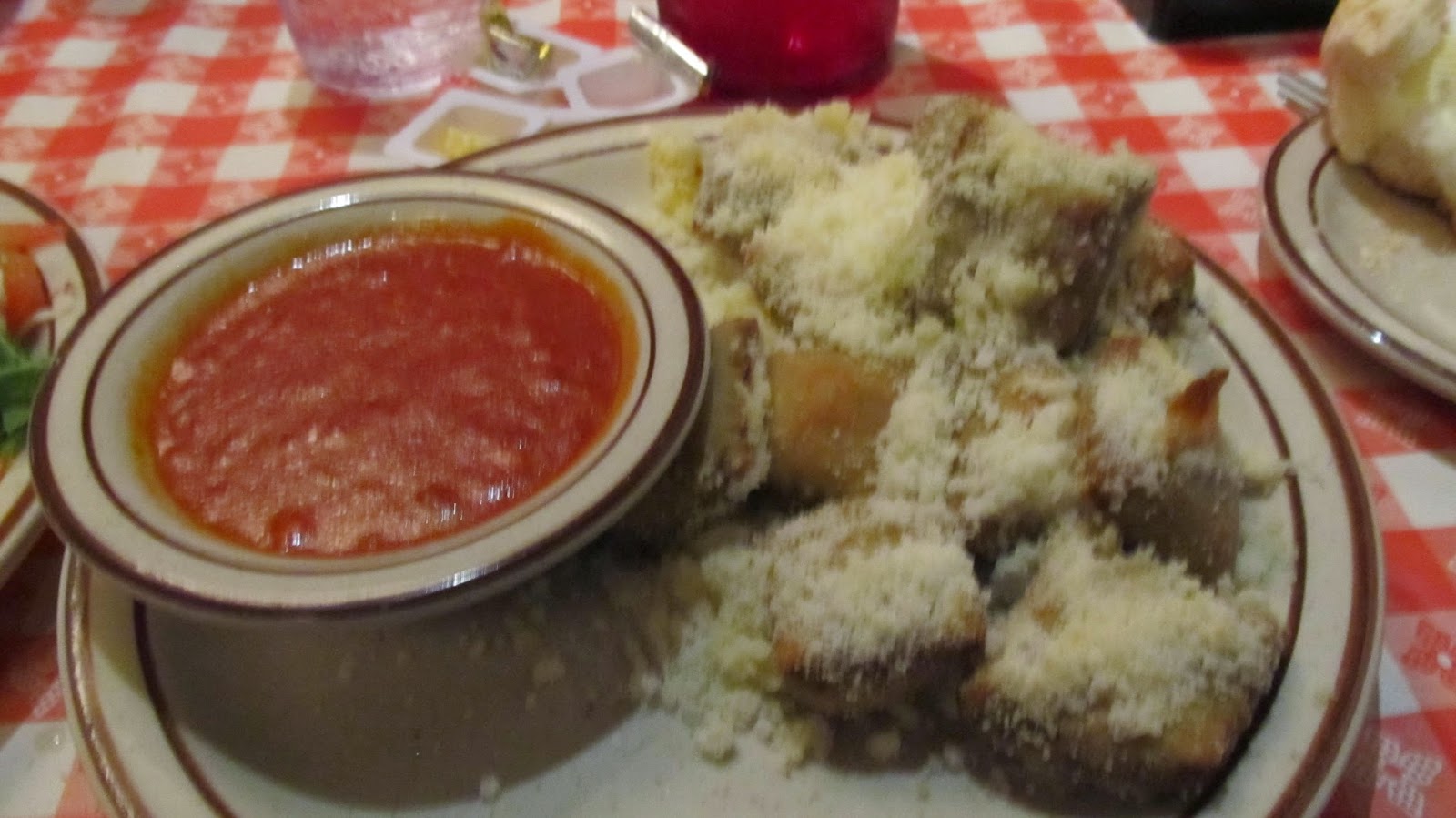 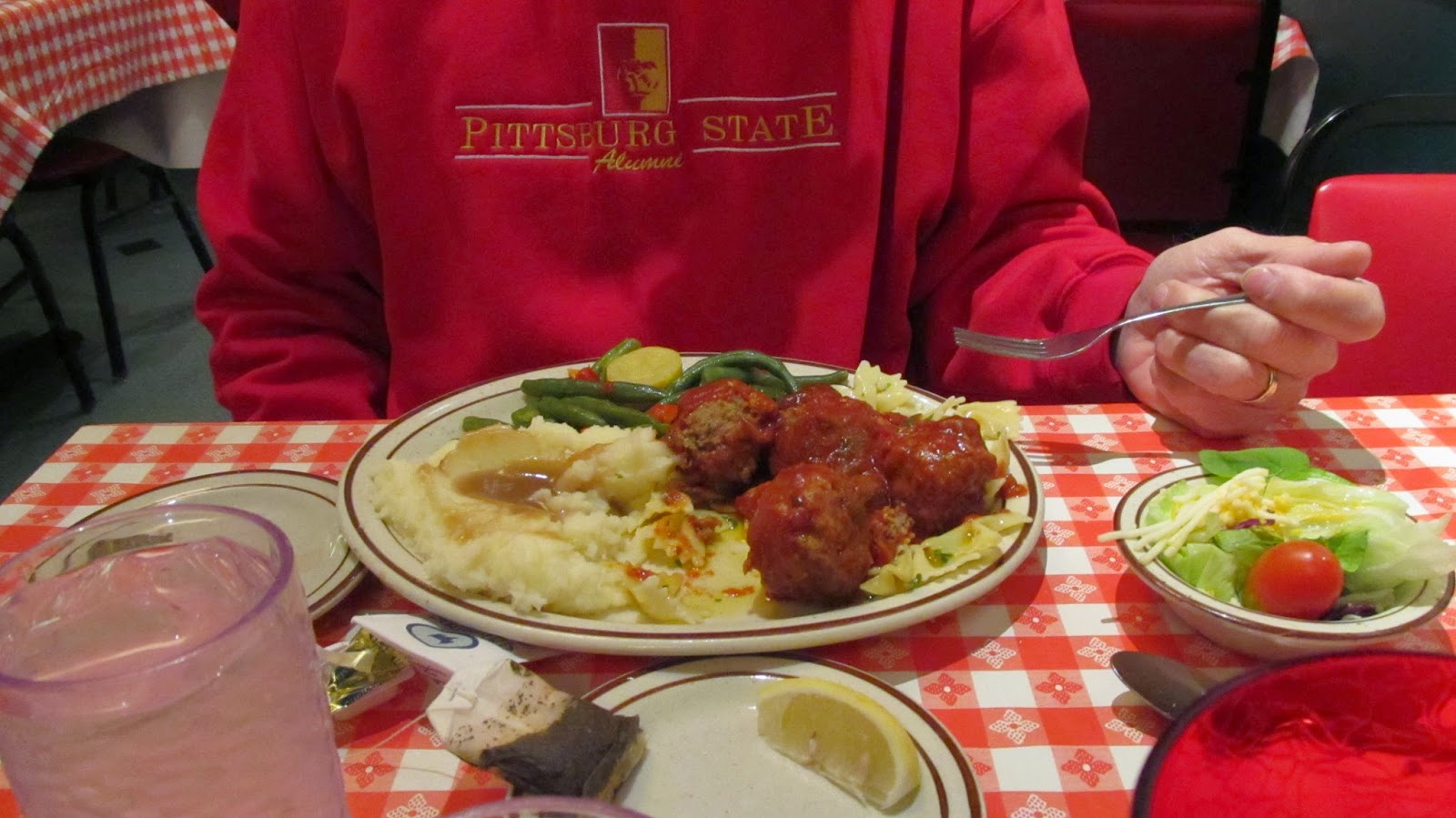 We returned to our room  for shifting some of our groceries, stealing a a brief rest, and then heading to St. Charles. The brick streets and decorated store fronts were beautiful and the day dark enough already the lights were glowing. St. Charles, a river front town preserves its ancient brick buildings well and at Christmas they set a scene of the 1800’s with strolling Father Christmas characters, a pioneer Santa, carolers in long skirts and top hats. The stores offer items that I don’t need or want, but it is fun to wander in and out looking for something special. I picked up some small gifts along the way, but having just weeded this house of “stuff” (and I assure you there is plenty left!) I was leery of toting home more things that were “cute” dust collectors. 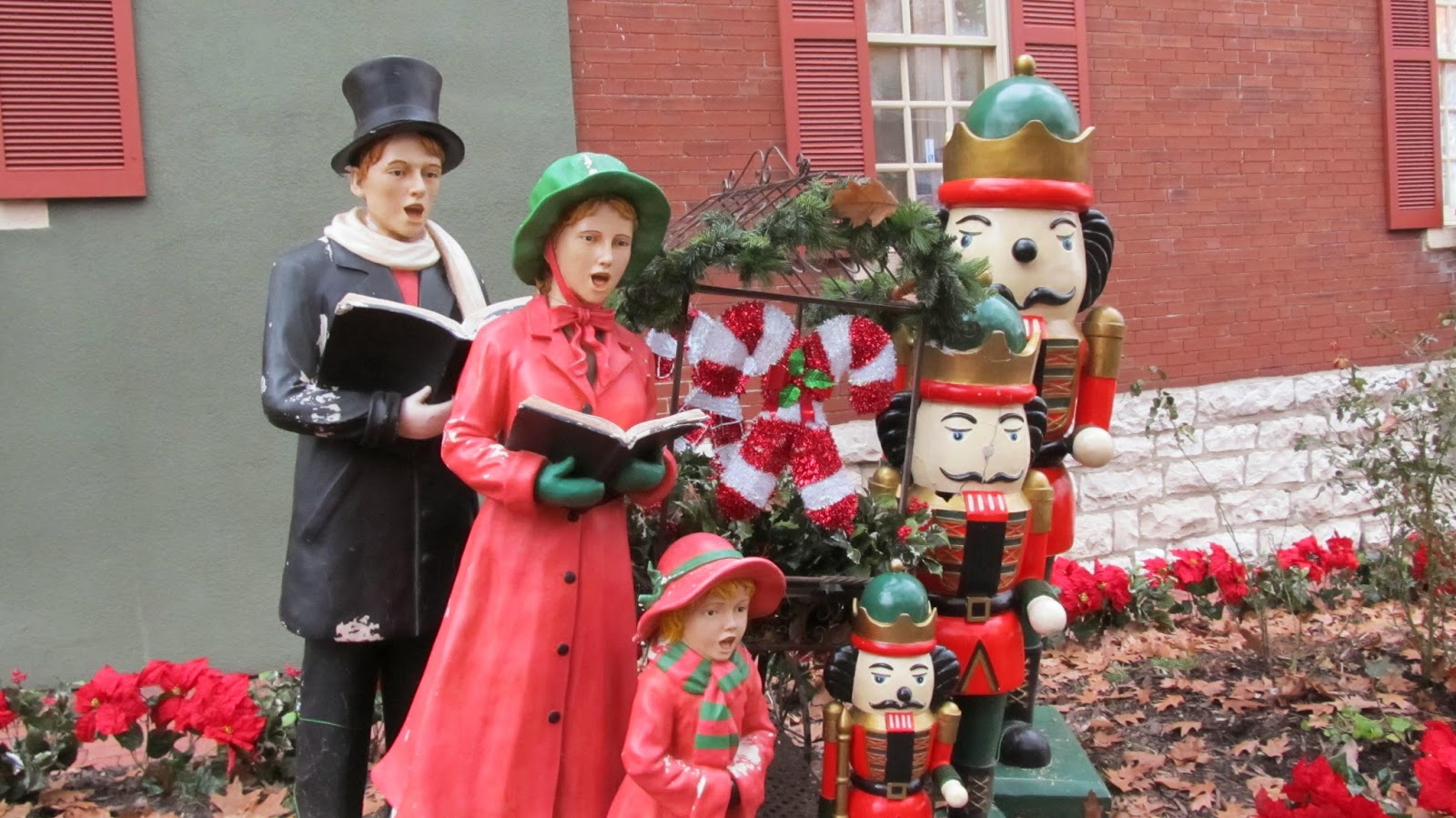 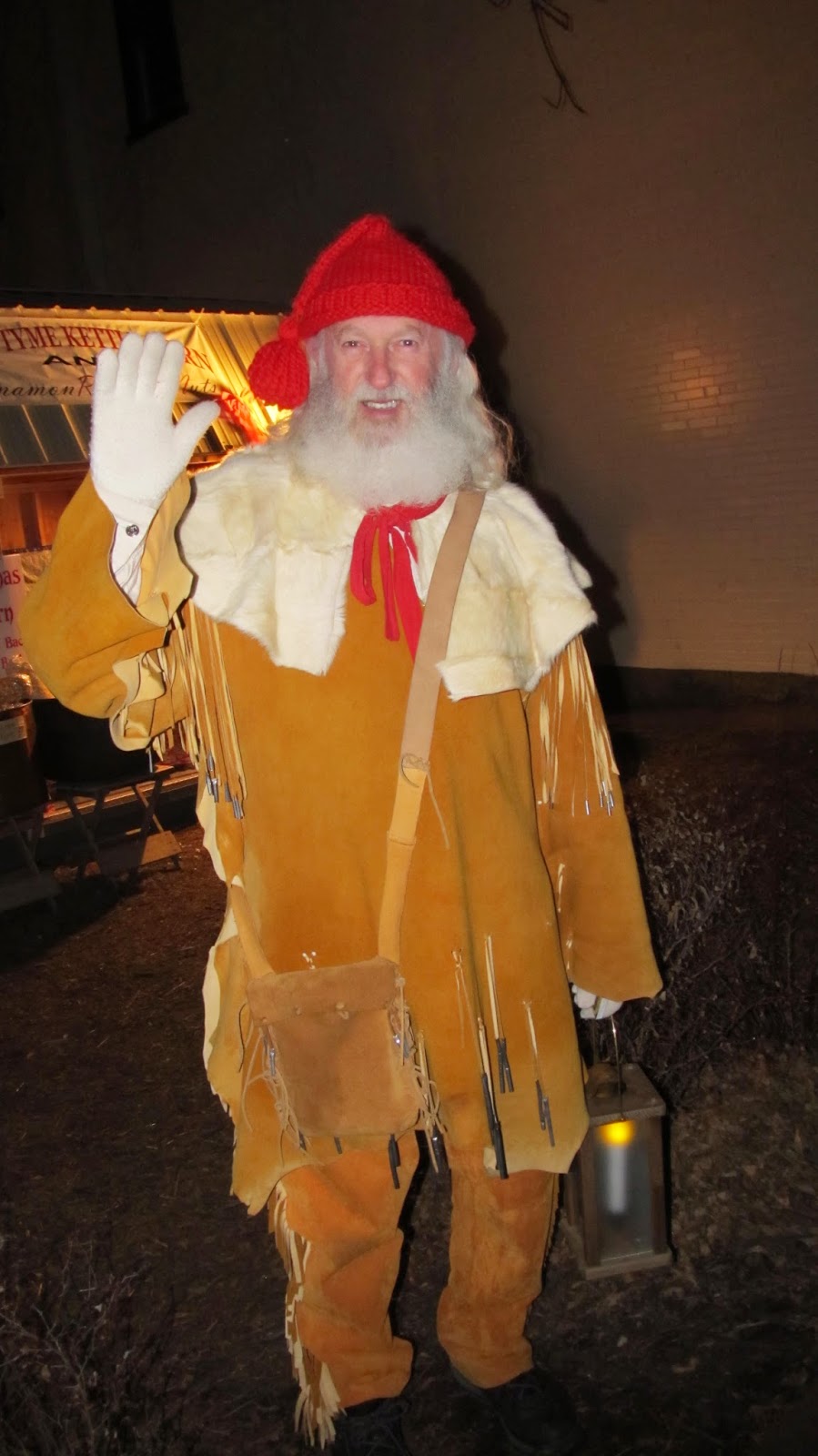 We visited our favorite bookstore now under new management but looking the same as always. It was finely decorated for the season. We ate at Braden’s although neither of us were very hungry after such a spectacular lunch. The place was crowded to the hilt; we got the last tiny table for two. We had big cups of hot tea and BLT’s we barely finished. I went to the washroom and when I came back I passed a table where I matched eyes with a lady who seemed familiar. Whoops, could it be? I asked if she were Becky? Yes. Becky Povich? Yes. There sat one of the first bloggers I ever read and was followed by. We had never talked on the phone or met, but wow, did we know each other. She and her husband were having a very rare date night; we had never been to Braden’s before. What were the chances we would be six feet away from each other on a December night? What fun to meet her in the flesh and to introduce our husbands. This was a real gift for the season. 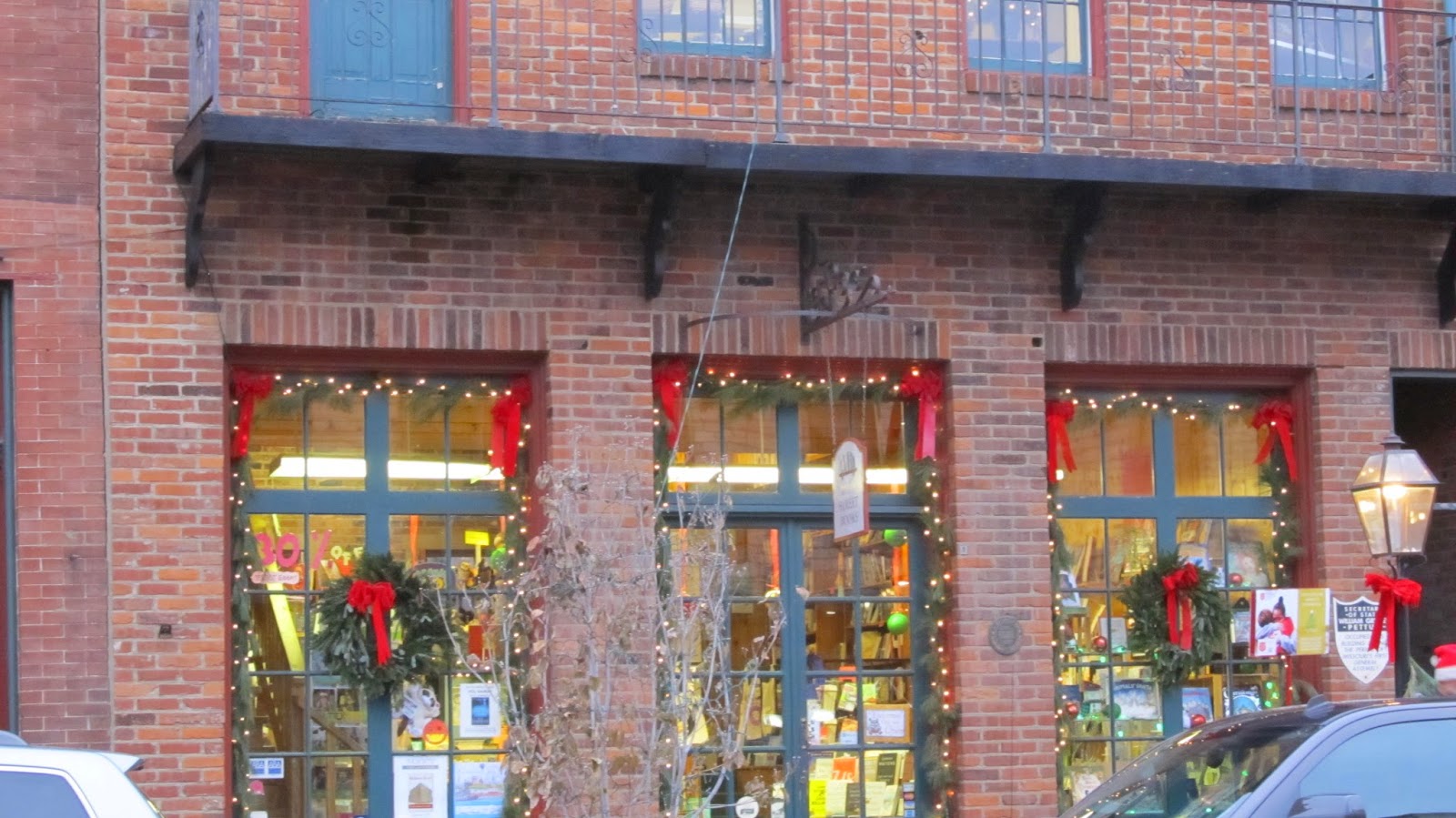 My one disappointment was not tasting the roasted chestnuts when the English characters roasting them were late and had to build a fire yet. We were tired and cold and with a 45 minute more wait we gave up. Also the very old brick sidewalk and odd curbs were potential disasters for us in the dark night. 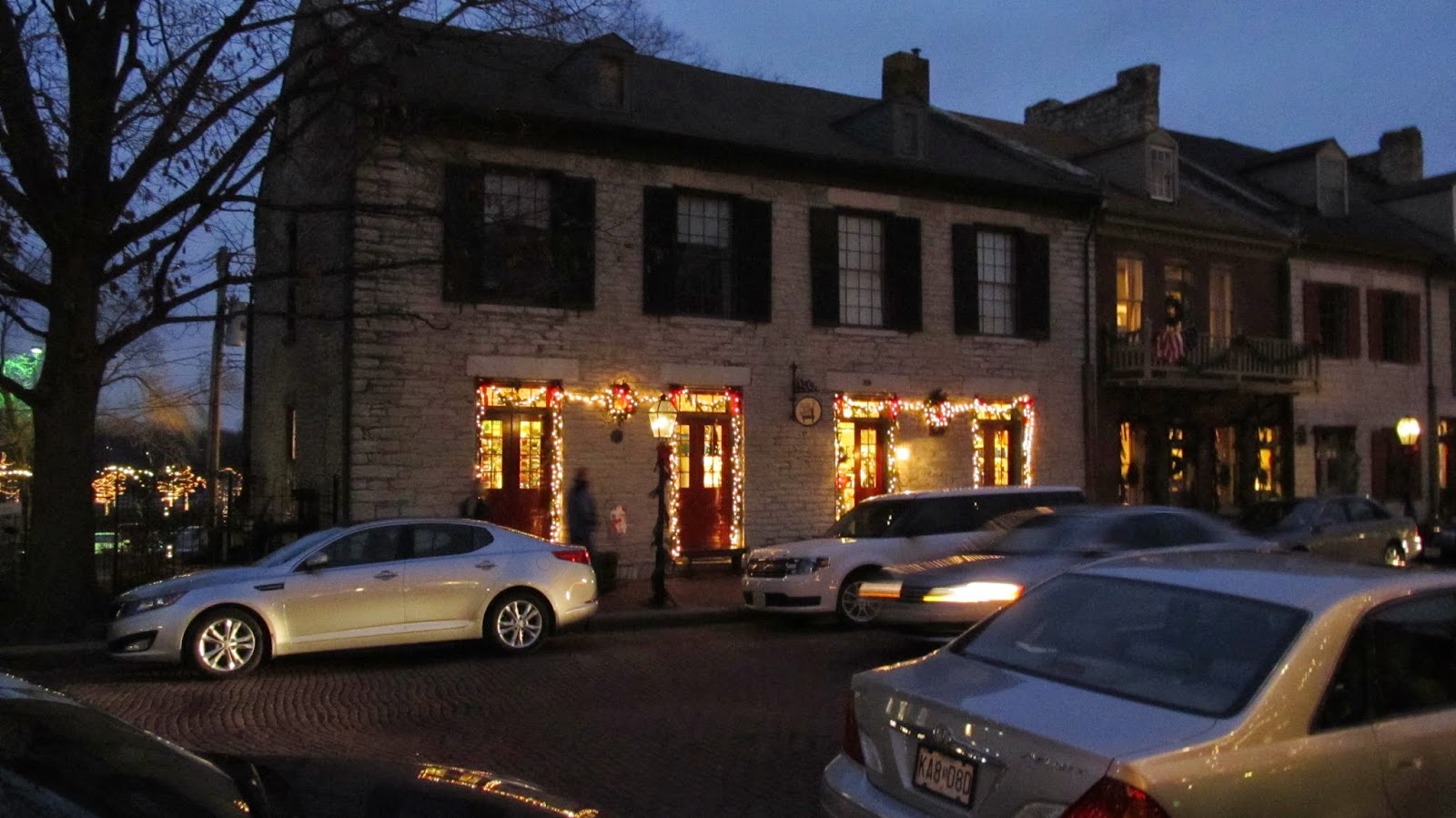 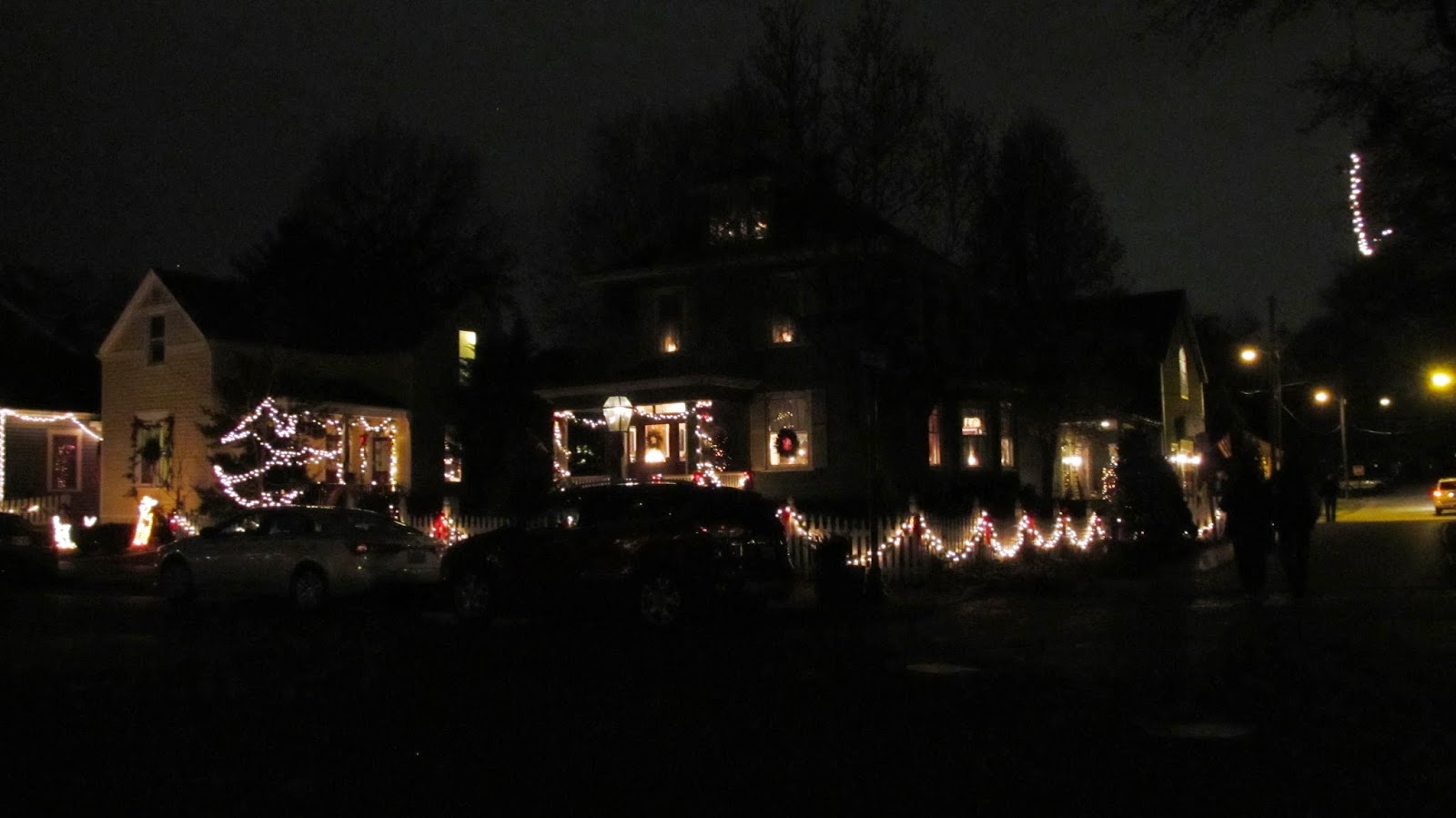 The next morning our friends managed to meet us for breakfast although they were  washed out.  None of us could give up the opportunity to see each other for even a brief while. We have been friends for about 45 years, meeting in an apartment complex when we were all newly married. The time was short but better than nothing. They lacked energy and we had a long road ahead to get home. More work waited! 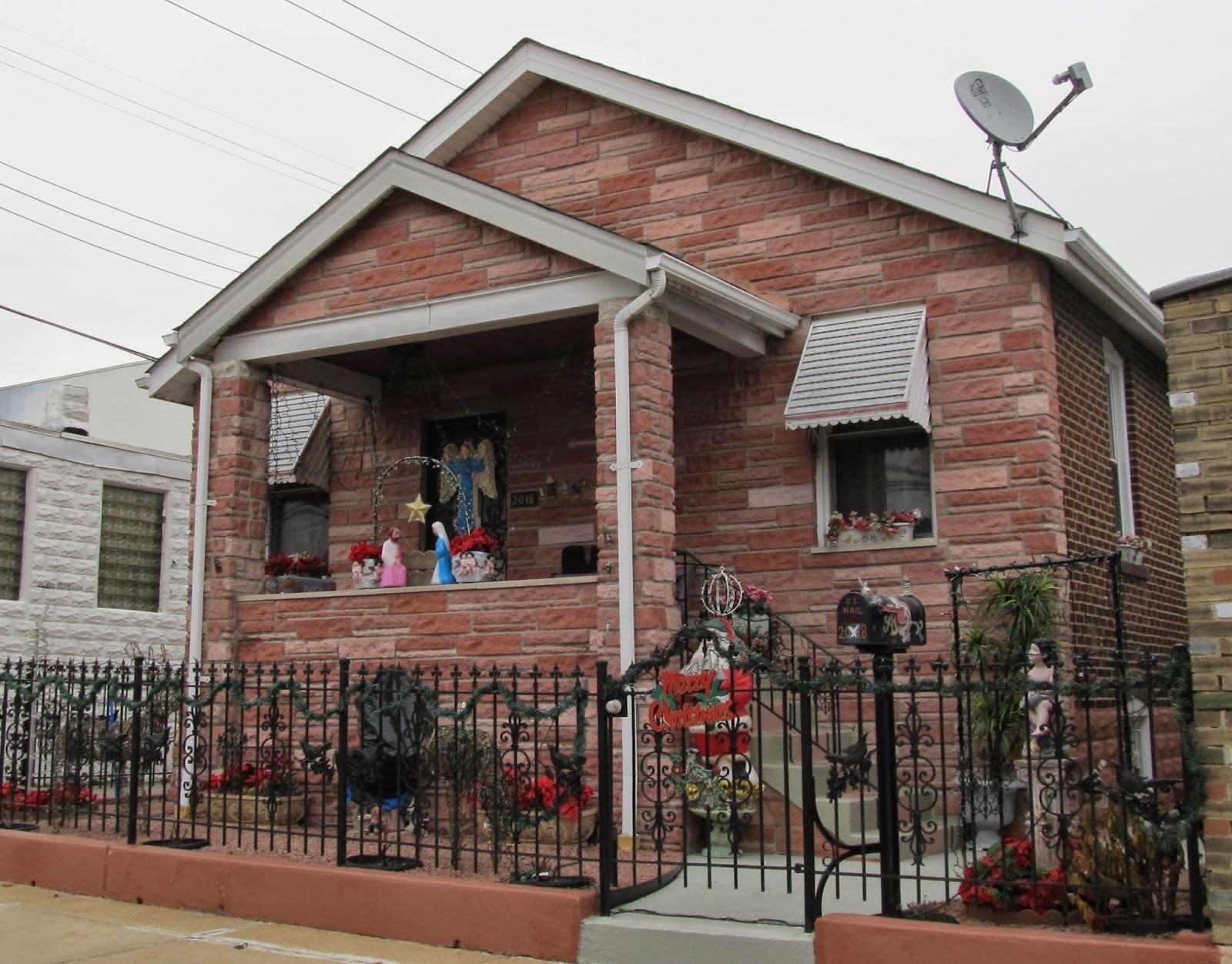 Home on the Hill decorated for Christmas 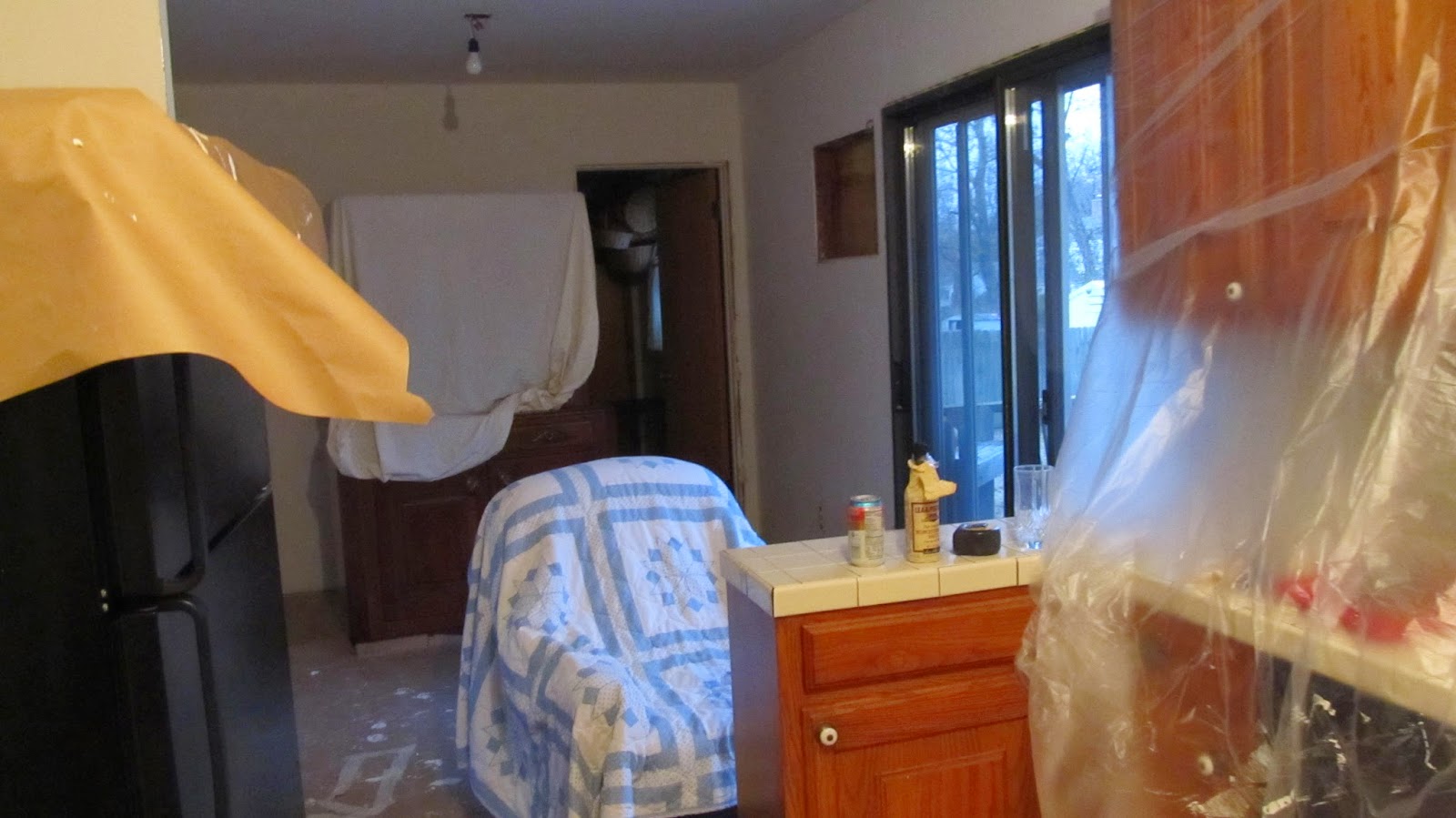 Three weeks after the initial five of waiting for ceiling men and things look barely better. Oh, there is progress and today will move us forward quite a bit barring any unforeseen hindrance. We waited five weeks for the ceiling men and they did their work in eight hours! They have the tools to work with and they are young, sturdy men who know what they are doing from repetition. 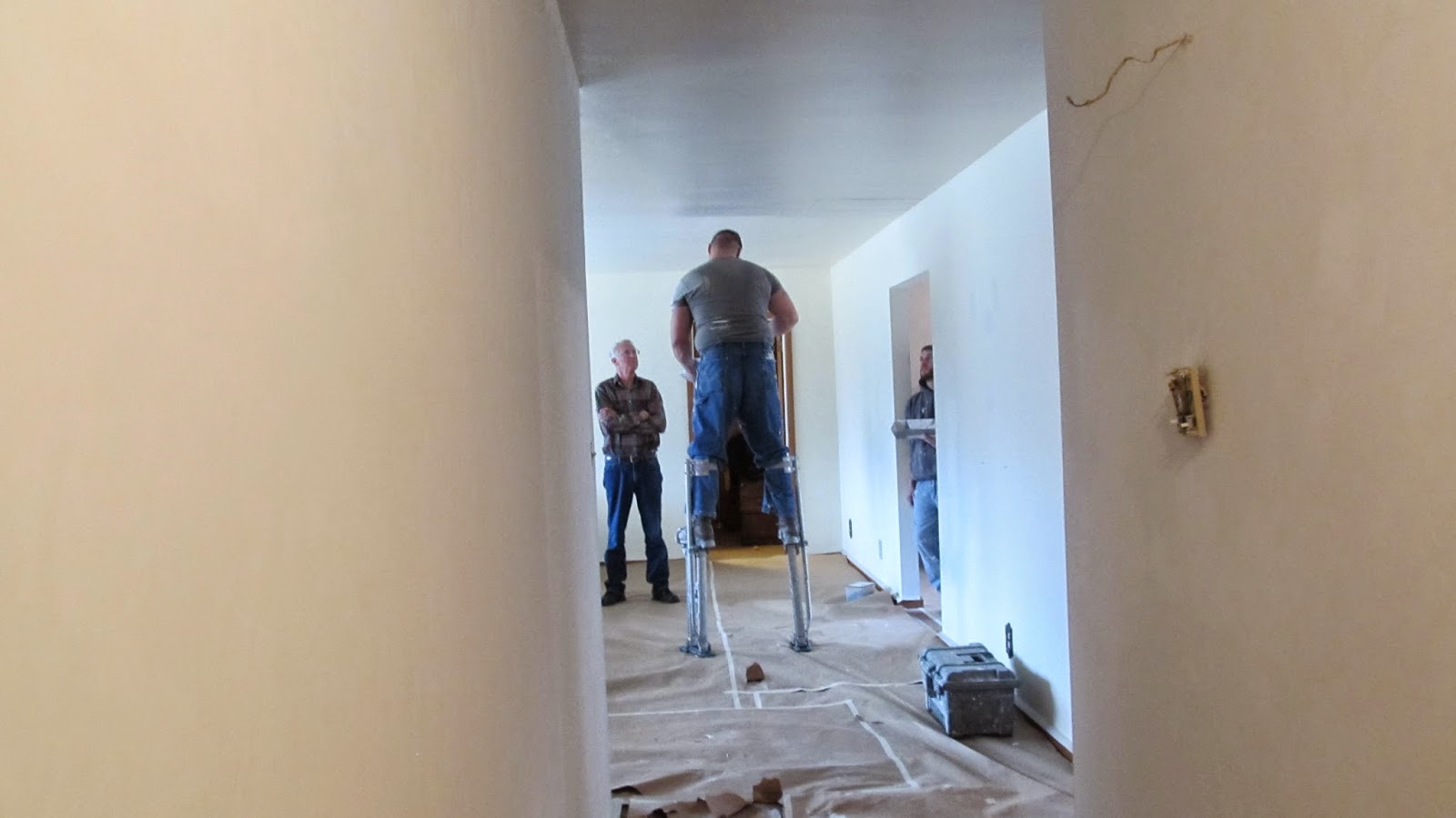 The air is still thick with dust. Our hair picks up minute particles in the air like a magnet grabbing filings. I can’t get to half my clothes. What was once a trail to the dressers is now packed with upturned chairs. Today I am giving up my book club’s Christmas luncheon for the first time in ten years. I hate to miss but I feel like a soiled napkin after a dinner party right now…and the work waits. 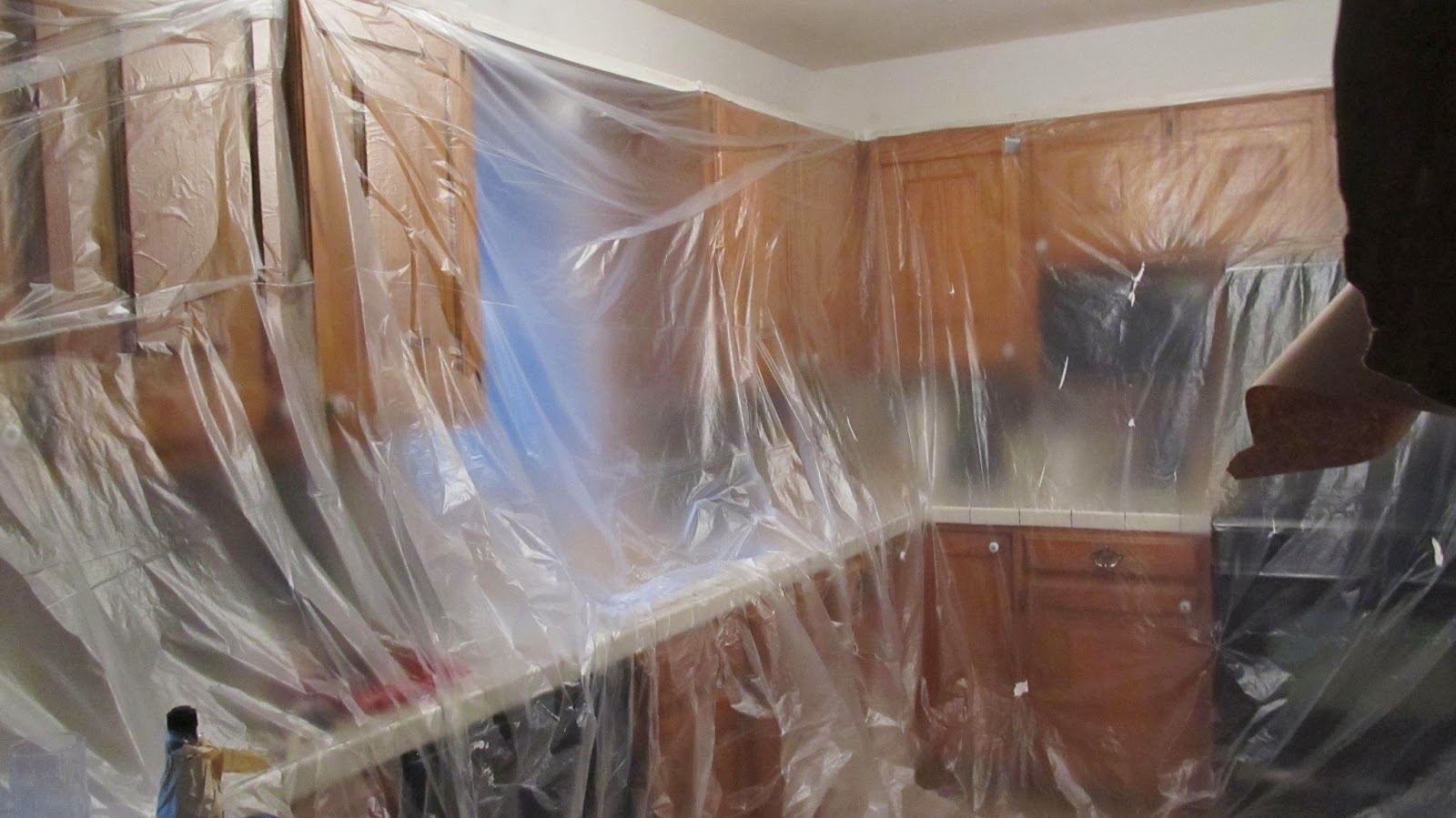 DH is happy so far with the results. Thank heavens. He is pleased with the first painting and how easy it goes on. Ah, if he knew the price he would be prostrate in the floor. But I am the fetcher of such items and if he doesn’t see a price, he does better! The front of house will look much the same as the shade is similar. Today the back rooms will be the challenge. We are doing some creative painting which he might not understand before it is over. He is a “paint it all the same type guy”, but I bought three shades in one color family to mix it up a bit…a departure even for me. Ah, will see how this goes as I hear the ladder moving now. 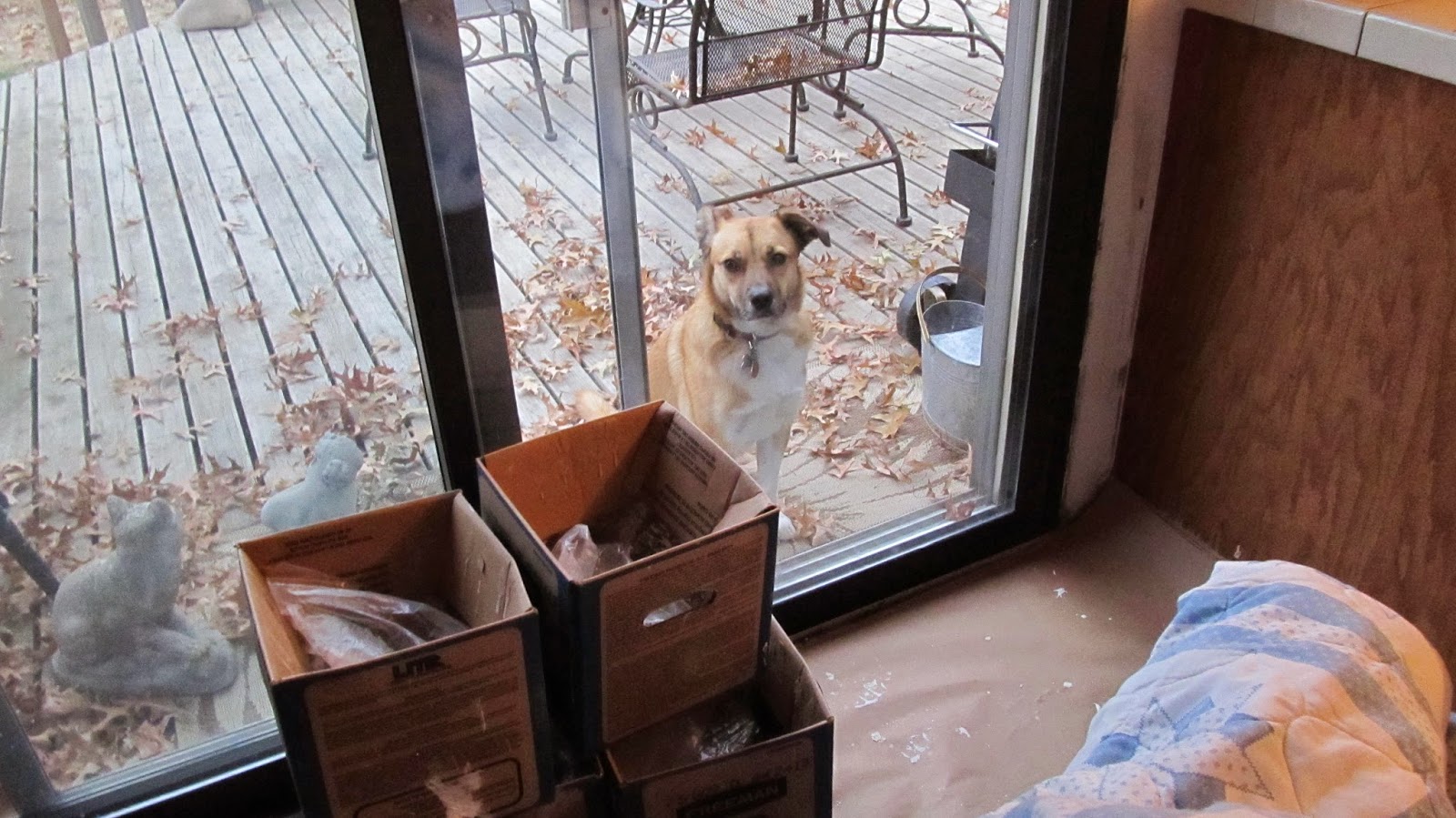