Writing with the Wizard

There were not many books with Kansas settings or heroes when I was growing up. One of the first books I remember my mother reading to me was Frank Baum’s The Wizard of Oz. I found the story thrilling as Mother read a chapter or two a day before naptime; I could hardly wait for the next installment. When the Judy Garland version of the book was first shown on television years ago, my mother made watching the movie a special treat. We stayed up late, had saltines and milk for a snack, and curled up on the couch watching the movie together. I remember the flying monkeys scared the dickens out of me!


It turned out that The Wizard of Oz was a good lesson and preparation for the writing life. Any writer needs courage to take on such an endeavor as writing. A writer throws herself into the piece, producing the best product possible and then has to have courage to face editors who fail to see its value. She must have a heart to keep trying when it seems everyone gets into see the Wizard (read Editor) but her. That same heart makes her try again and again with more and more markets. When an editor rejects her wonderful, heartfelt efforts, the writer must not allow rust to set in from her tears of disappointment; she must keep herself well oiled and working.

Yesterday, to end this year, I got two rejections. Two in one day makes it harder to deal with at the time. It makes the stretch since the last acceptance seem extra long. It makes the near misses not count for much either. I went to my writing journal and counted the sales, the maybes, and the rejections. My numbers clearly said I was not getting in to see the Wizard as many times as I was traveling down the Yellow Brick Road!

But I heard Dorothy’s chipper voice and Toto’s little enthusiastic bark urging me on. I melted the Wicked Witch of Doubt with belief and I vowed I will write again in 2010. Now if those darn Flying Monkeys will just stop battering my confidence and leave me alone! 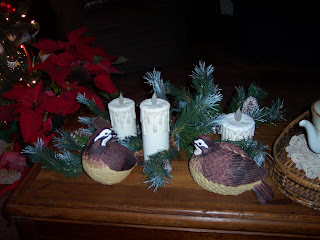 
The hushed house is festive but serene.
No tree, house eves aren’t strung with dazzling lights.
But the house is not drab and gray,
Like the thinning hair at my temples.
While no longer a place of clutter and chatter,of children,
Yet memories of their voices do ring in my heart.
Fragrant kitchen, warm oven bakes cookies still,
While steaming up frosty window panes.
Pots of radiant poinsettias adorn room corners
And fence in the antiquated Nativity scene
That quietly heralds the approaching season.
Although with slower steps, friends still tread
Across the boards of a greenery laced porch,
Arms no longer filled with gifts and gizmos but
Still stretched wide for hearty hugs,
Seeking the warm comfort of friendship.
Later, I gaze across the cold night sky,
Gleaming crystal bright with star candles,
And soak up the quiet stillness while opening
The ribbon-tied memories of my life.
I celebrate the passing and changing seasons,
Treasure the tranquility of another winter.

Posted by Bookie at 9:45 AM No comments: 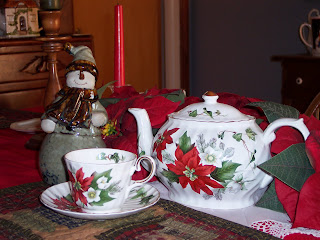 Recently, I was in my children's old grade school. At the front door, a female teacher and four little girls were decorating the Christmas tree for the front hall. Short arms reaching around the tree, one girl was helping the teacher stretch lights while others were hanging ornaments. Where were the little boys?


What is it about men that they don’t like to be bothered with decorations, lights, and carols during the Christmas season? They like eating the fudge, having a large dinner served, and opening the packages, but sometime after Thanksgiving they begin the duck and cover routine when they hear the gals rooting in the storage closets and looking at red and green ribbon. A friend gave me a nice seasonal refrigerator magnet that says, “Three wise men, are you kidding?” because I had a household of one husband and two sons. She was right on target because not a one of them enjoyed putting up a tree, hanging lights on the house, or heaven forbid, taking anything down in January.


When I was growing up, we used a live tree bought at the local grocery store. I can smell the pine and balsam still, but we had to put it up late in the season due to drying out and fire dangers. Once we had a tree bought, it leaned outside on the porch anchored in sand or a tree stand soaking up water. We had to wait until Dad was ready to “deal with” the tree. He would put us off night after night until finally, grumbling all the way, he would string the lights out, check the bulbs, and begin to wrap the tree with strings of lights evenly from top to bottom. He put the star on top and then he was done. Mother and the girls hung the ornaments and placed the tinsel.


Once married, I found the scenario was much the same. After the children came along, we did try to go to the tree farm for several years. We took babies and dogs, tramped across the fields in frost and snow trying to find just the right tree. Our best choosing still would yield field grown trees that were sometimes sparse on one side, dry on the tips, or sporting crooked tree trunks. Once home it was a trick to set the tree up right. One year, a huge tree was whittled down as DH tried to find a good fit for the room and to solve the problem of a bad trunk. After several attempts at sawing and then watching the tree fall over repeatedly, he lost his temper. He hoisted the offending tree up, carried it through the sliding glass door, and thrust the tree into the back yard. That year was our first artificial tree, and we have not had fresh trees since.


Our boys are grown now, and they inherited the "bah humbug" gene from their ancestors. They seemed to enjoy coming home from college to a tree up, especially if there were lots of packages underneath wearing their own names, but moaned when asked to deal with lights or help take a tree down. Putting Christmas away was always a lonely time on New Year’s Day unless the enthusiastic blather of commentators from a televised football game in the family room was meant to be company.


No one ever like the tinkling carols of Christmas cheer or the solemn songs of the season either. Right after Thanksgiving this year, I heard one son grunt and growl under his breath when he heard the early music of Christmas playing. I decided that maybe I shouldn’t do so much Christmas if I were the only one who cared. I remember as a child going to a grandmother’s house where there was no tree except a pink net job on top of the television. I always felt sorry for my Gran because she was missing out on the green trees. Maybe she had just given up years earlier. When I took children home and both their grandmothers had no trees at Christmas, I felt sad there were no Christmas trees, a seasonal thrill, to share. Maybe those mothers just wore out too from doing all the planning, decorating, cleaning up afterwards—from doing all the caring.


So this year I am going to forego the lights all over the house and won’t drag out the tree. I won’t move all the furniture, stuff lamps and end tables in closets, drag down a multitude of glass balls, Santas, reindeer, bows, snowmen, glitter, and lights from storage. I did get some poinsettias, arranged a few candles, put out the Nativity, threw a red tablecloth on the dining table, and brought out the Christmas cups for our morning breakfast tea. I bought an Andrea Bocelli Christmas CD to listen to in my office. What I am finding is that less is more really.


I am going to minimize the cooking too. No one needs sugar, some can not have nuts, and everyone is watching the cholesterol. Gifts of food are nice, but no one I know is truly hungry or needs more food. I am going to invite my friends to have soup and homemade bread some evening instead of a feast. I will ask them to stop by the house after their own frantic shopping sprees. On their way home, they can come up the walk by windows steamed from a hot oven and a brewing tea pot. I will invite them to kick off their shoes for a few minutes, sip cinnamon tea and sink teeth into homemade bread slathered in yellow butter. Those few minutes of warm home and simple whole grain bread will be their gift.


In an essay titled Redeeming All Brokenness, Madeleine L’Engle writes: As we are called into Advent, we are called to listen, something we seldom take time to do in the frenetic world of over–activity. I think that is truer this year, now more than ever. It has been a year of job loss, economic ruin, moral corruption, foreign wars, and generalized disappointment in our society. Now more than ever we need to stop and look again at what is important, to realize the commercial glitz of Christmas is not bringing satisfaction or meaning to our lives. I find that less bustle at decorating and buying is making for a soothing atmosphere. I will take time for Advent church services, think positive and constructive thoughts, try to find reason and meaning in my life, find a way to show gratitude for the past year. Maybe next year I will return to the flurry and commotion, to the tree and lights, and then again, maybe this calmer, simpler manner might become my new tradition for Christmas.